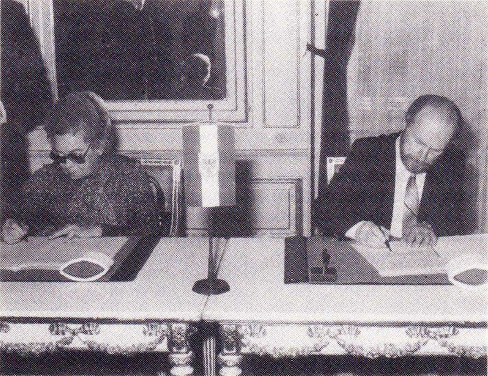 It was a unique and exciting opportunity for me to serve as the IFSR President during the initial period of four years. Now, at the end of my tenure, it is a proper time to reflect upon the IFSR state of affairs.
IFSR was legally established in April 10, 1980, when a treaty between the Austrian Government and IFSR was signed at an official ceremony in Vienna by Dr. Herta Firnberg, the Austrian then Federal Minister for Science and Research, and myself, as the IFSR President. According to the treaty, IFSR became committed to a domicile in Austria, while the Austrian Government committed itself to provide IFSR with office space and financial support.
The IFSR aims are “to stimulate all activities at the international level” The following is a list of major IFSR accomplishments during its initial period of four years (April 1980-April 1984), which coincides with my tenure as the IFSR President:
1. In fall 1981, IFSR started a publication of its Newsetter. Its primary purpose is to exchange relevant information among the IFSR member societies and report on IFSR activities. It is ublished three times a year under the experienced editorship of Paul Hanika.
2. In 1982, IFSR sponsored the International Conference on Systems Methodology (Washington, D.C., January 5-9,1982). It is remembered as a successful conference with broad international representation.
3. IFSR initiated a prestigious lecture series to honor the memory of one of the pioneers of systems research and cybernetics, W. Ross Ashby (1903-1972); it is referred to as the W. Ross Ashby Memorial Lecture Series. The first lecture in this series was given by Heinz von Foerster at the mentioned conference in Washington1; the second lecture was delivered by Robert Rosen at the Seventh European Meeting on Systems Research and Cybernetics in Vienna in April 19842.
4. In summer 1982, IFSR opened its office in Laxenburg, Austria, across the street from the International Institute for Applied Systems Analysis. The address is: IFSR, Hofstrasse 1, A-2361 Laxenburg, Austria.
5. In April 1984, the first issue of an official IFSR journal was published. The journal, which has the name “Systems Research”, is published quarterly by Pergamon Press in Oxford under the fine editorship of John Warfield. A special arrangement was reached with the publisher according to which a sufficient number of copies of the journal is made available to individual members of the IFSR member societies for a price that does not exceed production costs and postage. This arrangement makes the journal easily accessible to individual researchers. For example, the Society for General Systems Research, one of the IFSR members, provides each of its individual members with a copy of the journal; the small cost involved is covered by the membership fee. An interesting feature of the journal is that each volume will contain a special issue devoted to the role of systems research in dealing with problems germane to computer technology. These special issues will be supported by the Burroughs Corporation and will have a wider circulation.
6. As part of a broader publication program with Pergamon Press, IFSR has also initiated a book series this year. The first volume in this series, “Anticipatory Systems: Philosophical, Mathematical and Methodological Foundations” by Robert Rosen, is now in production.
7. Since spring 1984, IFSR has been in charge of the General Systems Depository. This service was initiated at the State University of New York at Binghamton in 1974. Until this year, it had been associated with the International Journal of General Systems, where abstracts of items placed into the Depository (reports, data collections, video tapes, etc.) were published3. The whole Depository was transfered to the IFSR office in Austria earlier this year. Abstracts of new items will be published from now on in the IFSR Newsletter and all transactions will be made through the IFSR office.
8. In addition to the Depository, IFSR also started to coordinate internationally various bibliographical activities in the field of systems research, as an important service to the professional community. This will result in periodical publishing of bibliographies in this field. In fact, this service is a direct continuation of a bibliography of general systems literature in the period 1945-1976, which was published by SUNY-Binghamton in 19774. The
first bibliogra~hy prepared under the IFSR auspices is now available and we hope to engage Pergamon Press in its distribution.
In addition to these ·explicit accomplishments, the four year existence of IFSR has already shown a favorable influence in strengthening systems research groups in various countries. This influence will undoubtedly become even more pronounced in the years ahead.
With a new Board (formed in April 1984) and some new member societies, IFSR is now entering the second stage of its development. It is very fortunate that Robert Trappl became the second IFSR President. There is no one who has done more for IFSR than he. I wish him the very best.
As far as I am concerned, my service to IFSR will not completely terminate. I will continue to serve as Editor of the mentioned IFSR Book Series, as member of the Editorial Board of Systems Research, and in any other function that might be desired.
Let me end this report by extending my best wishes for a successful future of IFSR as well as the whole systems research movement.
George J. Klir
Outgoing IFSR President
References
1. H. Von Foerster, “Beginnings.” Systems Research (to appear).
2. R. Rosen, “The physics of complexity.” Systems Research (to appear).
3. J. V. Cornacchio, “The general systems depository: its mission and operation.” International Journal of General Systems, Vol. 2, No.1, 1974, pp. 81-82.
4. G. J. Klir, G. Rogers, and R. G. Gesyps, Basic and Applied General Systems Research: A Bibliography. SUNY-Binghamton, Binghamton, New York, 1977.
5. R. Trappl, W. Horn, and G. J. Klir, Basic and Applied General Systems Research: A Bibliography (1977-1984). IFSR, Laxenburg, Austria, April 1984.
By Gerhard Chroust