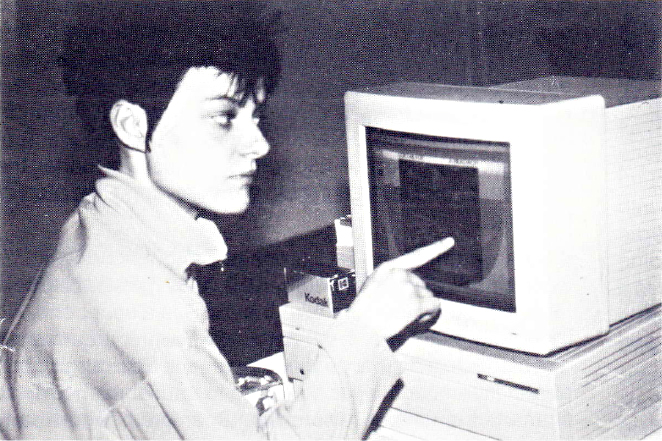 Interactive art – The artist receives an image on the computer screen. Alters it and sends it back. Foto by Stephen Sokoloff. IFSR Newsletter 1990 No. 1 (25)

ROY ASCOTT
Hochschule ftir angewandte Kunst
Oskar Kokoschka-Plalz 2 A-1010 Vienna, Austria
Art does not reside ln the object alone, nor is meaning flxed or stable within the physical limits of the artist’s work. Art is all process, all system.
Art – like other forms of communication – alises out of interaction.
‘According to the metaphor of the tube, communication is something generated at a certain point. it is carried by a conduit (or tube) and is delivered to the receiver at the other end. Hence there is something that is communicated, and what is communicated is an integral part of that which travels in the tube. Thus, we speak of the ‘information’ contained in a picture, an object, or, more evidently, the printed word. it is evident, however, even in daily life, that such is not the case with communication: each person says what he says or hears what he hears according to his own structural determination . . . communication depends not on what is transmitted, but on what happens to the person who receives it. And this is a very different matter from ‘transmitting information’. “(H.R. Maturana & F. J. Varela, The Tree of Knowledge: the Biological Roots of Human Understanding, 1987).
In both cases we see that meaning is created out of interaction between people rather than being “something” which is sent from one to another. If there is an author of this “meaning” then it may be the system of interaction itself, in all its particulars, which should be described as the author, or we might want to refer to a “dispersed authorship” covering all those involved in negotiating for meaning in a given context. Where the context includes artificial memory in a telematic system, the potential for the creation of meaning is greatly enlarged. And when such systems are activated globally, in an art context, we can expect to see quite richly layered fields of “meaning” being created.
The Renaissance and the modern vision of art
If, in the past, we have thought that a work of art is an object, or that the artwork “carries” a definitive meaning “created” by the artist and received by the viewer, this can perhaps be understood in the light of our Renaissance heritage. The ordering of space in Renaissance painting, with its absolute rules of representation and of viewing, a space subject to the authority of the vanishing point, which also positioned the viewer in relation to the “world” and established a control of a reality consisting of separate and discrete parts (everything in its place and a place for everything), can be seen as the perfect metaphor for the ordering of parts in the societies to which it gave expression. Renaissance space is authorised as “real” space by many of those societies in which information flows one-way, from the apex of the social pyramid to the base, where it informs the thinking, the orthodoxies, the rules of conduct of a culture. This one-way despatch fashions consciousness and enforces a dominant scientific paradigm just as the vanishing point and the rules of representation determine, within the pyramid of space based at the picture plane, a coherent view of a world presented as “reality”. Under these circumstances, the art object could well be understood as embodying not only unambiguous meaning and beauty but also absolute truth. This form of representation and this status of the object as art continues today, of course, in some quarters, and has to some extent been automated by the photographic process. Its persistence is well understood, given the seductive nature of the apparent certainty and coherence it claims to depict.
But the art of our time is one of system, process, behaviour, interaction. As artists, we deal in uncertainty and ambiguity, discontinuity, flux and flow. Our values are relativistic, our culture is pluralistic, and our images and forms are evanescent. If it is processes of interaction between human beings which create meaning and, consequently, cultures, then those systems and processes which facilitate and amplify interaction are the ones that we shall employ for more richly differentiated cultures and meanings to emerge. This is precisely the potential of telematic systems. Rather than limiting the individual to a narrow, parochial level of exchange, computer-mediated cable and satellite links, spanning the whole planet, open up a whole world community, in all its diversity, within which we can interact. Telematic networks are ubiquitous and can be accessed from virtually any location – the home, public institutions, libraries, hospitals, prisons, bars, beaches, mountain tops, as well as studios, museums, galleries, academies and colleges. Anywhere, in fact, that is reached by telephone, including mobile telephones in cars, trains, ships and planes. The primary effect of creative interaction within such networks is to render obsolete the distinction in absolute terms between the artist and the viewer as producer and consumer respectively. The new composite role becomes that simply of participant in a system creating meaning seen as art. This contrasts forcibly with the Renaissance paradigm of the artist standing apart from the world and depicting it, and the observer standing outside of the artwork and receiving this depiction. It was a paradigm which also placed the scientist outside the world looking in, and led to all kinds of alienation and
separateness in society.
The implications
Our cultural participation in intelligent telematic networks has long-term implications which we can scarcely imagine. The symbiosis of computers and human beings, and the integration of natural and artificial intelligence, will be realised in forms and behaviours the understanding of which is beyond our present conceptual horizon.
By Gerhard Chroust