IFSR Newsletter 1993 Vol. 12 No. 3 November
Dr. Stephen Sokoloff
Linz, Austria
It may seem self-evident that one doesn’t have to re-invent the wheel each time one constructs a wagon, but the application of this principle to the design of computer software is proving revolutionary. Basically, it involves the packaging of both data and the instructions for their manipulation into information-entities that can be shuffled about and inserted at various positions, either within a given program or in different ones. This should facilitate the reuse of programs. Computer-users might be able to devise their own software by simply sticking together appropriate “building blocks”.
This technique which is known as object oriented programming, has really been around for millions, or perhaps even billions, of years. It is utilized in most of the genes of higher plants and animals. We therefore must briefly consider the nature of hereditary information.
Genes essentially contain coded recipes. These are linear arrangements of chemical bases, which can be compared to the letters of the alphabet. Words, which are three “letters” long, generally represent amino acids, the building blocks of proteins. Thus the order of the bases, of which there are four different kinds, in a gene determines the order of the amino acids in a protein. Since some proteins, namely the enzymes, control all of the cells’ chemical processes, establishing which of these substances will be produced in the cells is equivalent to devising a choreography for the molecular transformations in a living system.
In bacteria and yeast each gene has a continuous sequence of amino-acid coding bases. In higher plants and animals, however, blocks of such bases (EXONS) alternate with stretches of bases in which no information is encoded (INTRONS). The latter are generally much longer than the former in mammals. When the genes send out instructions (messages), these contain their entire supplies of information; the non-coding segments have to be spliced out to enable the ribosomes, the “protein factories” of the cell, to correctly read the intended content. For the discovery of the introns, Phillip A. Sharp and Richard J. Hoberts were awarded this year’s Nobel Prize for Medicine. 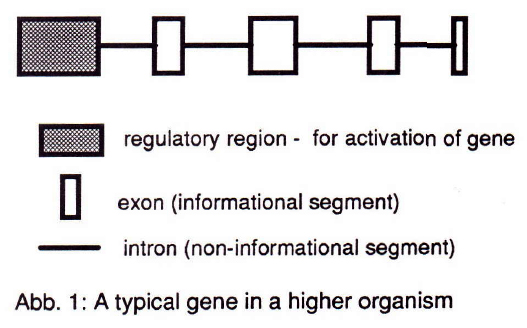 The exon-intron arrangement scheme may appear unnecessarily complicated, but researchers now have reason to believe that it confers substantial benefits upon the organisms it occurs in. One must realize that within the sequences of bases in the genes breaks and rearrangements frequently occur. Where this happens is determined by chance. Therefore having long stretches of non-coding material before and after each information segment (EXON) vastly increases the probability of entire exons being transferred intact to new sites. That in turn enhances the likelihood that the new proteins formed by the reshuffled entities will prove useful, since each entire block represents a time-tested and well-functioning unit. Such recombination really does seem to occur, because many different genes have been shown to contain similar exons.
Another advantage ol the exon-intron type of arrangement is that blocks of information can be spliced together in different fashions in the “messages” which the genes disseminate. In this way it is possible to produce different forms of a protein from a single gene – for example, membrane-bound and secreted antibody.
Since the exon-intron system makes use of a complicated splicing mechanism and since it is missing in bacteria, the most primitive organisms, it was previously regarded as a later evolutionary development. However, various lines of evidence now lead many researchers to believe that it represents the original form of gene organization. According to this view, the bacteria eventually “discarded” their introns in order to achieve a more rapid cell multiplication.
The same information-block principle which has proven so advantageous for higher plants and animals during millions of years, is now being applied to computer programming. It may be as old as life itself, but for software specialists it’s a new insight.
Literature:
Alberts, Bruce, et al, “Molecular Biology of the Cell”, second edition, Garland Publishing Inc., New York, London, 1989.
Corcoran, Elizabeth, “Soft Lego”, Scientific American, January 1993.
By Gerhard Chroust