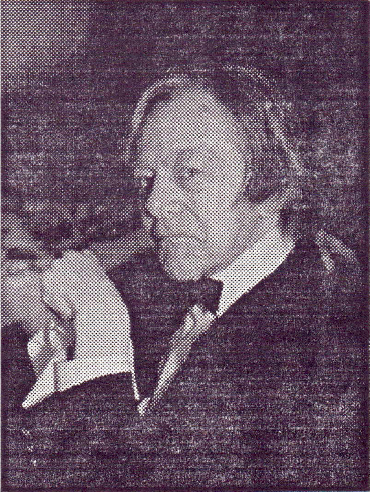 The achievement of Gordon Pask, who was born in 1928 and retired last year, cannot all be listed in this brief account. Because of his recognition and development of the conversational paradigm (see below), he is rightly considered to be one of the forefathers of “Second-order Cybernetics”. He is also one of the forefathers of “First-order Cybernetics”.
The mainstay of Gordon Pask’s working life has been the research organisation “System Research (SR)” which has obtained many important research and implementation contracts {rom the US military, the British Ministry of Defense, the British Home Office, The British Road Research Laboratory, etc. Pask also developed and implemented many ideas that are now common such as the self-adaptive machine SAKI (Self Adaptive Keyboard Instructor). He is Professor at Brunel University and the University of Amsterdam. His bibliography includes more than 250 publications and projects – and he is still going strong!
Gordon Pask’s Conversation Theory
We can gain a better understanding of Pask’s life work by briefly considering one of his most important theories. It deals with learning and, therefore, also with teaching. Pask’s initial premise is that humans are machines for (with the purpose of) learning. He maintains that communication in a meaningful learning environment (i.e. the world we design and/or find ourselves in) can only be achieved by means of conversation [circular, feedback, (computing) matching responses, agreement – including the vital agreement to disagree with personal and personally generated meanings and understandings – and, hence, knowledge; and not by means of coding (linear, programmed response, binary logic) with its tendency towards universal and absolute meanings. In a conversation, an understanding of a topic is presented to another “p-individual” (the one that does the learning and knowing), that returns its understanding of (what is presumed to be) the same topic so that the proposer can confirm the similarity of the two understandings. A conversation is circular. It is a relativistic means of communicating relativistic (and personal) understandings.
In this personal, relativistic world, testing of what learners know is still possible. The means for doing this include conversational explanation (to another human) or explicit demonstration (to a machine). In the original CT machine environment “CASTF” (Course Assembly System and Tutorial Environment), testing was carried out on a “modelling facility”. This allowed models that exhibited understandings of topics to be constructed by hard-wiring them.
(Strongly edited version of :R. Glanville: Gordon Pask, A Skeleton for an Unofficial Biography)
Systems Research, vol 10, No.3 contains contributions of the following authors, all related to Gordon Pasks work:
R. Glanville; S. Beer; P. Cariani; H. von Foerster; J. H. Frazer; R. Glanville; D. Gregory; A. Hayes and G. Davidson; R. Llewellyn-Jones; A. Locker; L. Lofgren; G. Mclntyre Boyd; Fl. McKinnon-Wood; M. and P. Medina-Martins; P. Pangaro; E. Pask;A. Pedretti; C. Price; B. Scott; L. Thomas and S. Harri-Augstein; G. de Zeeuw;J. Zeidner; R. R. Choudbury
By Gerhard Chroust