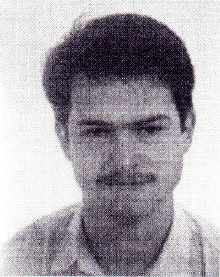 Comparing systems of former times with actual, modern systems, one can see that the new generation of systems is getting bigger and more complex, making the development of those systems more and more expensive. This new kind of systems requires a larger amount of knowledge regarding the different areas involved than was needed for former systems. The software developers of former days have become system engineers, who now have to face problems of adjacent areas such as project-management, quality management.
The development of such complex systems generates new kinds of requirements and implies new methods, process models and strategies. Problems, neglected so far, suddenly show up.
Looking at this kind of systems, a definition of CBLSS would additionally match two other kinds of similar systems: (i) complex systems, whose number of components is rather low though the internal connections are very complex and (ii) large systems, which have a big amount of components and mainly a simple kind of connections. The link between these kinds of systems can be seen in the following figure. 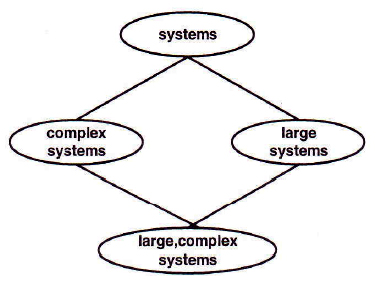 The term “computer based” refers to the fact that important functionality is based on computers (often up to 80%) and that this computer support is not isolated but an integral part of the system.
Methods supporting the development of CBLSS must be able to integrate different areas of knowledge within large systems. The resulting number of persons involved requires a method which can also be used in a global way: to cover a major part of the integrated specialties. To find such a method which is universally applicable and specializable and which also covers all kinds of complex systems, will remain unachievable. However, some global methods combined with specialized ones already exist. These integration tendencies can also be found in the tools used.
The development process resulting from the application of new methods and tools is in general similar to known types of processes but differs considerably in important parts from the development of “normal” systems. Areas like documentation, information flow and security and safety of the system as well as the development process itself are of special importance. Unfortunately little support for these areas exists at the moment. This deficit arises from the lack of understanding of the problems arising from the changed development process on the assumption that CBLSS still can be developed like”normal” systems.
Nowadays CBLSS are getting more and more important within technical applications. This “new” kind of systems requires a “new” kind of view, development, thinking and a “new” kind of engineering discipline matching exactly the requirements and problems of large complex systems.
Thome B. (ed.): Systems Engineering – Principles and Practice of Computer-based Systems Engineeing.- Wiley Chichester-New York 1993
Tschobokdfi A., “Computer Based Large Scale Systems – Systemwissenschaftliche Erfordernisse flr den Entwutl komplexer Systeme”, Thesis, Kepler, Linz 1995
White 5., et. al.: Systems Engineering of Computer- Based Systems.-IEEE Computer Nov. 1993, pp. 54- 65
By Gerhard Chroust