IFSR Newsletter 1995 Vol. 14 No. 2 (37) July
Rudolf Bauer
Siemens AG, Corporate Research and Development,
81730 Milnchen, Germany
email : Rudolf.Bauer @ zfe.siemens.de
Introduction
For a mobile robot operating autonomously in an unknown, unprepared environment it is essential to know its configuration (position and orientation) while executing a user defined mission. A rough estimation of the robot’s configuration is possible with odometric data (speed and path length), but due to unpredictable slippage of the wheels and other physical imprecisions, the estimated configuration deteriorates due to a large cumulative error. To reduce the uncertainty and error, localization techniques are additionally based on sensor data (e.9. sonar) and a gradual development of a map of the environment. The resultant configuration error mainly depends on the amount and quality of the incoming sensor data. The quality of these data is critically dependant on the path chosen by the robot.
A novel dynamic and integrated path planning approach is used to concurrently support the data acquisition for estimating the location and identifying new natural landmarks in an a-priori unknown environment. This creates the following boot-strapping problem. To update and continuously correct its configuration, the robot needs an adequate landmark map. On the other hand the robot needs to know its configuration very accurately so as to identify old and new land-marks. This process may become unstable if the robot travels in a way by which its sensors cannot adequately recognize previously identified landmarks. Therefore, a compromise must be found between keeping the configuration uncertainty low, identifying new landmarks and fulfilling a user defined mission.
Integrated Navigation System
A general hierarchical architecture for mediating between different robot goals (fulfilling a user defined mission, localization and map building) uses a three-layer system consisting of . “Global Path Planning”: Based on the user’s mission and a global on-line grid map of the environment, a very fast geometrical global path planner produces a “rough” path consisting of a set of intermediate goal points. . “Integrated Path Planning”: The global path is used, together with information about the current landmark map, the robot configuration and its uncertainty and local obstacles, to plan a more detailed local path. . and “Robust Obstacle Avoidance”: This local path is then sent to the robot’s pilot level, which autonomously executes the path, while guaranteeing robust obstacle avoidance. Each of the layers uses a limited level of knowledge of the robot environment, thus acting with well-defined competence and responsibility. Suitable layer interaction provided by an intelligent scheduler leads to the desired behavior of the overall system.
While executing the path, the behavior of important system states (e.g. configuration uncertainty) is monitored. In the case of considerable deviations, which might occur in an a-priori unknown and dynamic environment, the execution is stopped and the integrated navigation scheduler is informed, which might then restart the cycle.
Experiments
The following experiments were performed on the Siemens mobile platform Roamer (Robust Autonomous Mobile Experimental Robot). It has 24 Polaroid ultrasonic sensors that are arranged in two horizontal layers around the robot. In both simulated test runs (see Fig. 1 and 2), the robot had no a-priori knowledge of it’s workspace other than the gray shaded rectangular outline of the workspace and two linetype landmarks (a, b) at the starting point A. 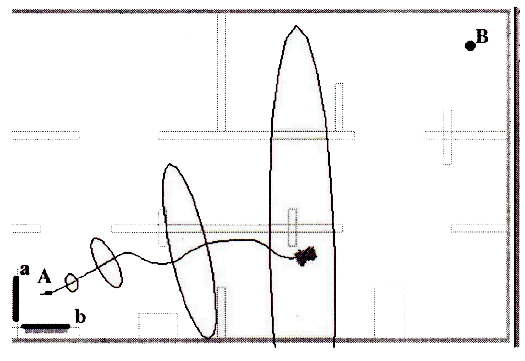 Fig. 1: Traveling directly from A towards B with reactive obstacle avoidance. The mission was interrupted because of the significant configuration uncertainty, Rudolf Bauer, IFSR Newsletter 1995 Vol 14 No 2 (37) July

Because the robot has no knowledge of the obstacles in its workspace (see Fig. 1), the robot starts to travel from A directly towards the target point B. After a few meters the first obstacle comes “in sight” which is avoided by moving to the right. After leaving the visibility regions of the given landmarks a and b, the configuration uncertainty grows dramatically. During motion the configuration uncertainty grows rapidly due to an assumed 5% slippage of the wheels.
Using the novel approach (Fig. 2) of integrated path planning, the robot mediates between three subtasks: 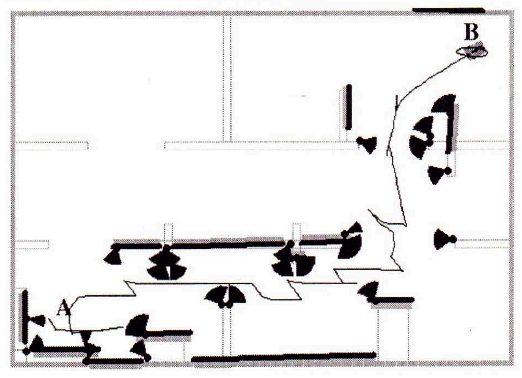 In Fig.2 the robot has found a number of natural landmarks, that are concurrently used to improve the configuration estimate (For point type landmarks the angular visibility range is indicated in Fig. 2). Arriving at target point B the robot had an absolute positional error of just about 15 cm after 25 m of traveled distance.
This approach dynamically plans local paths, in order to integrate the different robot tasks “user defined mission”, “self-localization” and “landmark building” by analyzing the estimated benefits and costs of each.
By Gerhard Chroust