IFSR Newsletter 1997 Vol. 16 No. 2 July
Werner DePauli-Schimanovich
The invitation of the “Institut Wiener Kreis” has made it possible to celebrate also here in Vienna the 85th birthday of Heinz von Förster, pioneer of cybernetics and system theory, colleague of Warren McCulloch at the MIT, etc.
On this occasion von Förster received the Ehrenkreuz for Science and Arts from the Austrian Ministry of Science, a high decoration of the Federal Republic of Austria. He was also made Honorary Professor of the Faculty for Fundamental and Integrative Sciences of the University of Vienna.
Heinz von Förster was not only active in the fields of cybernetics and system theory, but also in mathematics and logic. His works are also relevant for psychology and philosophy. In cybernetics he has lead us the way from control engineering to second-order cybernetics, which the sociologist Niklas Luhmann has taken up and elaborated. In this scientific branch, the formation of something new has become possible, via construction and self-organization, as opposed to narrow, unambiguous and strictly causal concepts. 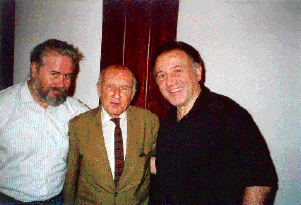 Heinz von Förster, Peter Weibel (r.), Werner-Jimmy DePauli-Schimanovich (l.), November 1996
Förster’s use of mathematics in the scientific branches he has worked in (memory theory, self-organization, epistemology, cognition, biophysics, automata theory, computer music, etc.) have often aroused the protest of rigorous mathematicians, while always producing new and interesting interpretations for the problems he has considered. In logic, he has worked on creating a scientific basis for non-founded systems, where axioms consisting of circular chains of implications (logic inferences) exist.
In philosophy he is one of the founding fathers of radical constructivism, according to which reality (in contrast to Plato) is not discovered but rather created by man. For mathematicians from Plato onwards, this has been an age-old, central question: Are mathematical objects discovered or created by mathematicians? As such philosophical questions (unlike mathematical questions) naturally arouse the interest of a broad public, Förster’s fame has spread together with the ever increasing modernity of radical constructivism.
In psychology, such questions are new and of particular interest with regard to American behaviorism. Giselher Guttmann, Professor at the Institute for Psychology at the University of Vienna points out the significance of constructivism for psychology, as, particularly with persons suffering from psychological diseases such as schizophrenia, the perceived reality is very often a mere construction.
Heinz von Förster has also been a pioneer of computer music, where he raised the question as to why a physical system (such as an arrangement of tuning forks) requires a far higher amount of energy and time to recognize a note than a biological system (such as the human ear). Already in 1968 he suggested reproducing (i.e. simulating) the biological method of recognizing notes with a computer. Thereby he has early-on taken his own route and has become one of the pioneers of computer music. (By the way, his brother Uzzi Förster is a long-standing Viennese jazz musician – a truly musical family indeed.)
Today computers are in such common use that one sometimes forgets their intellectual and philosophical historical background. It may be noticed that computers did not really come out of the blue, but rather have had a long genesis. From Gottfried Wilhelm Leibniz via Kurt Gödel and Alan Turing to John von Neumann, and Norbert Wiener’s first computer running with a program and the Wiener Kreis to Förster and McCulloch to cybernetics, and from Rudolf Carnap via Herbert Simon to Artificial Intelligence. And this way was paved not least of all in Vienna, and it should be pointed out that Austria has made an important historic contribution towards the development of computers.
Werner DePauli-Schimanovich
By Gerhard Chroust