IFSR Newsletter 1997 Vol. 16 No. 4 December
MANFRED BENEDER
Kepler University Linz,
Systems Engineering and Automation
Mb@sea.uni-linz.ac.at
Intelligent machines supporting human workers are more than dreams of the future. Equipped with sensors modern robotic systems are highly adaptable to their environment. They can operate in unknown surroundings without human supervision. An interaction between robot and environment is necessary to improve the capabilities of autonomous robotic systems. One major research work deals with speech recognition and the interpretation of gestures for use in robot programming. Using these interfaces everybody will be able to control a robot without the need of special knowledge.
As the use of robots will influence working and private life as well as artistic work a workshop dealing with latest trends in tele-operation and robotics, took place at the Ars Electronica Center (AEC) in Linz this May. Due to the basic concept of the AEC the workshop robots@aec.at [1], [2] combined lectures of various domains. Besides technical facilities of modern robot systems it also dealt with socio-cultural aspects of this technologic revolution. The interaction between man and machine was discussed as well as the question if social behavior among machines is possible. The scientific support for this workshop was given by the Department of Systems Engineering and Automation of the Johannes Kepler University Linz.
Initially robots@aec.at was inspired by Ken Goldberg‘s project TeleGarden, which at the moment is located at the AEC [3]. This installation allows people all over the world to view, plant and water seedlings in a living garden. The connecting platform is the Internet and the gardener is a robot. Working together in a distant location gave the user of the TeleGarden a virtual presence in this garden.
John Canny presented another example of tele-robots. His PRoPs, for Personal Roving Presence, are an excellent platform for studying computer-mediated human interaction. A blimp controlled via Internet is operating in existing social spaces, and can interact with a group of humans [4].
Ian D. Kelly presented a reinforcement learning algorithm for mobile robots based on sets of fuzzy automata. The robots have to learn to reactively avoid obstacles in their environment. The robot that receives the other robots experiences learns more quickly and robustly than the robot not receiving such information. For a demonstration of this algorithm a group of small autonomous robots, known as the seven dwarfs, was running at the AEC [Fig. 1]. 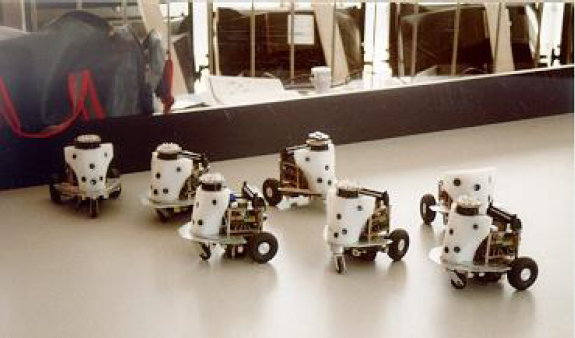 Research work on speech recognition based control for robots was presented by W. Jacak. A teleconference via ISDN to the 40-km distant laboratory gave a live demonstration of controlling a real robot. A concept for a multi-sensor reactive robot arm developed by S. Dreiseitl showed how the computational requirements of an autonomous reactive manipulator can be satisfied by a combination of neural network-based processing modules. This research work is done within a co-operation of the University of Linz and the Polytechnic University Hagenberg.
Based on the combination of arts and science the organizers of the workshop wanted to encourage a fruitful discussion. In future results of this discussion will be presented in further workshops on this topic.
[1] Manfred Beneder (ed.): ” robots@aec.at ” Proc. of the 1st Workshop on Teleoperation and Robotics – Applications in Science and Arts; June 6th 1997, Ars Electronica Center Linz, Austria. Oldenbourg; ISBN 3-486-24317-9 (1997).
[2] robots@aec.at Pictures and Information: http://www.sea.uni-linz.ac.at/systtechnik/conferences/robot_97.html
[3] The TeleGarden at the AEC: http://telegarden.aec.at/
[4] PRoP: Personal Roving Presence: http://www.prop.org
By Gerhard Chroust