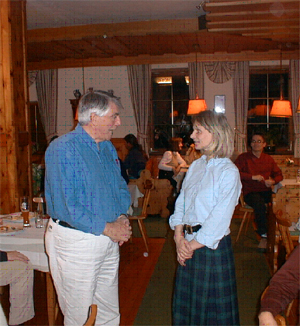 Fuschl – 24 years of history
The first Fuschl conversation was held in 1980 in Fuschl. . In the meantime some 40 Fuschl-style conversations have been held in many places around the globe. Fuschl is a beautiful, romantic little Austrian village on a small lake (Lake Fuschl) in lovely Salzkammergut, near Salzburg. It is surrounded by mountains of approx. 1600m height, see
www.fuschlseeregion.com/de/orte/fuschl.shtml In summer it is beaming with life and tourists, in April its is quiet and sleepy, a good place to speak, to listen and not to be disturbed by hectic, sightseeing tourists.
Why conversation and what form do they take?

The main reason for conversations as initiated by the IFSR was a dissatisfaction with the conventional style of conferences: An individual writes a paper, has 20 minutes to present it and then 10 minutes of questions. After that the conference is virtually over for the individual. Clearly, this format is not the most effective way to progress in the exchange and development of ideas on pressing major issues.
The experience we will have during the week at Fuschl is of quite a different nature. It is in the form of a conversation. Bela Banathy defined a conversation as follows:
A Conversation is

At Fuschl we will spend 5 days in intense discussion around our chosen themes and triggering questions. A major concept of a conversion is its being a process engaged in by self-organized teams who select their own theme for their conversation
The theme is initiated in the course of a preparation phase, that leads to the intensive learning phase: the 5 day conversation itself.
The teams follow a set of conversation rules that guide their action (they generate their own rules during the initial stage of the conversation). They document and share their findings, prepare a team report, and reflection papers that present their own findings. The IFSR will publish the outcome of the conversation in the form of proceedings.
Members take the message of their experience with them and apply what they have learned in their own contexts of life. The conversation process never ends. 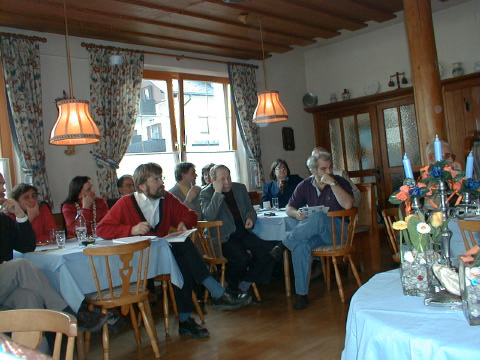 Steps in the Fuschl Conversation
Preparation Phase
The preparation phase for Fuschl 2004 is now underway. The five basic themes have been selected, but teams now need to work on refining these towards a set of agreed upon trigger questions for their conversation. To do this potential participants and team co-ordinators are asked to proceed as defined by the key dates below:
1 January 2004
Latest date for potential participants to submit (e-mail) their input paper with the application form to the team co-ordinator of their intended theme, with a copy to Gerhard Chroust, the Secretary of the IFSR (gc@sea.uni-linz.ac.at). The input paper should bbe between one and four pages long and should suggest the directions for the discussion within the topic area of the team and offer some associated trigger questions for the team.
2 February 2004
During January the IFSR Secretary will liaise with the team co-ordinators to select those who will be sponsored by IFSR to attend the Fuschl conversation.
Invitations to the accepted participants will be issued by 2 February 2004.
Logistical and financial considerations restrict the number of participants to about 29.
Selection will depend on a number of factors. Most important will be how well the input paper contributes to the theme. The need for a wide geographic spread of participants and the wish to introduce a proportion of newcomers to the conversation will also be taken into account.
1 March 2004
Team coordinators to prepare a short summary of key ideas from the input papers, including the selection of a coherent range of trigger questions from the suggested ones. This draft summary should be sent to members of the team by 1 March 2004, inviting their comment and /or endorsement. This summary should also be passed to the IFSR Secretary for posting to the Fuschl 2004 web-site.
1 April 2004
Team co-ordinators to revise the summary input in the light of comments and send this to the team by 1 April 2004. This paper represents an important part of the conversation process. It is the collective effort of preparation and will hopefully provide a firm basis on which the team’s conversation (learning phase) at Fuschl can proceed.
Learning Phase: the Conversation
(Fuschl, April 18-23, 2004)
On April 18 the learning phase begins in Fuschl at the Seehotel Schlick. The participants follow their course of Conversation, reporting to the other teams and preparing an initial document of the outcome of their conversation.
At the on-set of the Conversation in Fuschl the teams review their agenda and choose specific triggering questions that guide their conversation. At the end of each day, the teams report on their progress. On Friday morning the teams present their findings. Plans are developed to accomplish the Dissemination Phase.
There might be deviations from this over-all plan depending on the specific needs of the individual conversation teams. 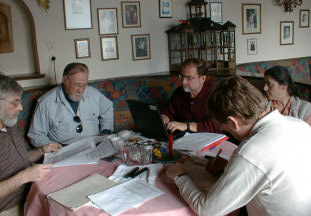 Dissemination Phase
It is our duty and the explicit wish of the IFSR that the outcome of the Conversations be disseminated to a wider audience. This will be done by publishing a preliminary report in the IFSR Newsletter and by later by issuing proceedings of the Conversation under the auspices of the Austrian Society for Cybernetic Studies.
15 July 2004
For each team an Intermediate team report is sent by the Team Coordinator to the Editors (G. Chroust and C. Hofer) for inclusion in the IFSR Newsletter.
September 2004
The Team reports are published in the IFSR Newsletter.
15 October 2004
The final papers of the teams are sent to the Editors by the Team Coordinators. Individual supporting papers should also be submitted.
November 2004
Proceedings of the Fuschl Conversations are published as a Report of the Austrian Society for Cybernetic Studies, Vienna with an ISBN-Number. Each participant and the member Societies of the IFSR will receive a copy.
IFSR Newsletter 2003 Vol. 21 No. 1 November
By Gerhard Chroust