Proceedings of the IFSR Conversation 2012, St. Magdalena, Linz, Austria
Appendix: What is the IFSR?
The Founding of the IFSR
Global conflicts like World War I and World War II, the related economic and social crises, social unrest, global interaction of powers, and the fragmentation of science made far –thinking scientists aware that a new paradigm for analyzing, understanding and hopefully ameliorating world problems. Scientists such as Ludwig von Bertalanffy, Norbert Wiener, and their colleagues found a response to these problems: holistic rather than fragmented, linear thinking, decision-making, and acting. They established two sciences to support humankind in the effort of meeting this end as a promising alternative to local and worldwide crises. These sciences were Systems Theory and Cybernetics. System was and is the word characterizing this new paradigm: Considering the whole and avoiding one-sidedness in order to survive.
From this combination most modern approaches, most modern knowledge in all spheres of human activity, solutions to environmental problems, etc., most of the existing problems can be ascribed to a lack of systemic thinking this combination, and there are many around that can hardly be solved without systems thinking and creative co-operation of diverse specialists. Our responsibility for the future obliges us to try to improve the current situation and not to leave an excessive burden to future generation.
In the early 50’s of the past century few scientists and societies were explicitly working in the field of Systems Sciences and Cybernetics. It was decided to interlink these societies and all groups of system thinkers around the world in order to try to find answers to some of the pressing problems of the world.
On March 12, 1980 during the 5th EMCSR-Congress in Vienna the then three important societies in the area of Systems Research, the Österreichische Studiengesellschaft für Kybernetik, the Systemgroup Nederland, and the Society for General System Research founded the International Federation for Systems Research. The key persons were: Robert Trappl, George J. Klir, Gerard de Zeeuw. They became the first officers of the IFSR (see IFSR Newsletter vol. 24, no. 1 (nov. 2006), [http://archive-ifsr.org/newsletters]).
Strong support came from the then Austrian Ministry of Science and Research in the person of Norbert Rozsenich who gave strong encouragement and provided financial support. F. de P. Hanika accepted the responsibility of Editor-in-Chief of the Newsletter of the IFSR.
Aims and Goals of the IFSR
The constitution of the Federation states:
The aims of the Federation are to stimulate all activities associated with the scientific study of systems and to co-ordinate such activities at the international level by:

The first Board Meeting in June 1980 defined the Federation’s goals: 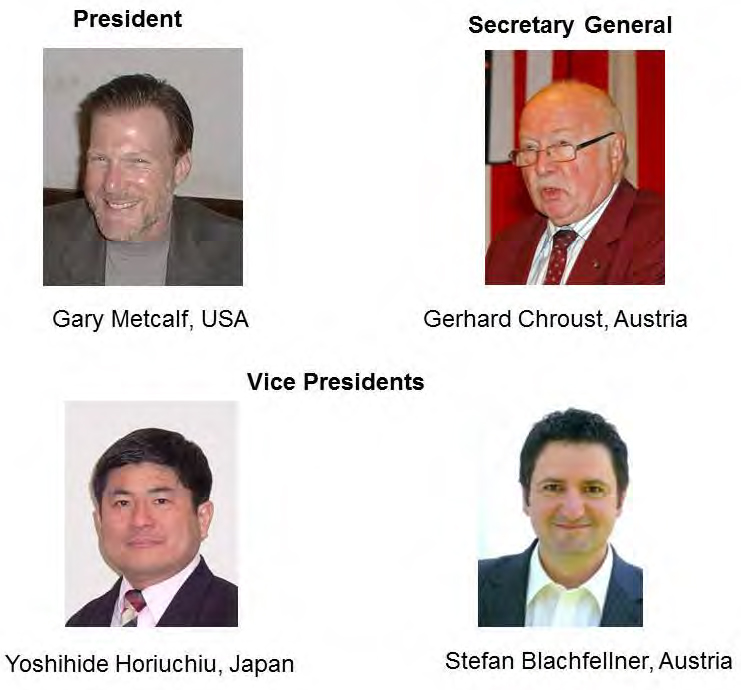 Future Plans
More than ever Systems Sciences are seen as a basis for balancing the divergent needs and interests between individuals and society worldwide, between ecology and economy, between nations of various levels of development and between differing worldviews. The IFSR commits itself to increase its contributions answering the needs as expressed in its original aims and goals. Some new activities, in line with the needs and the challenges, have already been started:

Member societies of the IFSR
The IFSR has shown a healthy growth with respect to the number of members. Currently it has 39 member societies, representing scientists from 24 countries on most continents [in brackets the membership number]. For the most recent list see:
http://ifsr.ocg.at/world/node/3.
ASC: American Society for Cybernetics [no. 7]
GESI: Asociacion Argentina de Teoria General de Sistemas y Cibernetica [no. 5]
ALAS: Asociacion Latinoamericana de Sistemas [no. 38]
AMCS: Asociacion Mexicana de la Ciencia de Sistemas [no. 37]
Asociacion Mexicana de Sistemas y Cibernetica [no. 19]
AFSCET: Association Francaise des Sciences et Technologies de l’information et des Systemes [no. 11]
ANZSYS: Australian and New Zealand Systems Group [no. 33]
BCSSS: Bertalanffy Center for the Study of Systems Science [no. 41]
BSSR: Bulgarian Society for Systems Reseach [no. 30]
BS-LAB: Business Systems Laboratory [no. 48]
CHAOS: Centre for Hyperincursion and Anticipation in Ordered Systems [no. 28]
HID: Croatian Interdisciplinary Society [no. 44]
GfK: Deutsche Gesellschaft fuer Kybernetik [no. 34]
GWS: Gesellschaft für Wirtschafts- und Sozialkybernetik [no. 12]
GIFT: Global Institute of Flexible Systems Management [no. 32]
Greek Systems Society [no. 14]
Heinz von Förster Gesellschaft [no. 42]
HSSS: Ελληνική Εταρεία Συστημικών Μελετών (Hellenic Society f. Systemic Studies) [no. 36]
IAS: Instituto Andino de Sistemas [no. 26]
IIGG: International Institute Galileo Galilei [no. 45]
IIIS: International Institute of Informatics and Systemics: IIIS [no. 39]
INCOSE: International Council on Systems Engineering [no. 46]
ISSS: International Society for the Systems Sciences [no. 3]
ISKSS: International Society of Knowledge and Systems Science [no. 35]
RC51: International Sociological Association , ISA-RC51 on Sociocybernetics [no. 40]
ISI: International Systems Institute [no. 4]
JASESS: Japan Association for Social and Economic Systems Studies [no. 31]
MSSI: Management Science Society of Ireland [no. 29]
META PHORUM: Metaphorum Group [no. 47]
OSGK: Oesterreichische Studiengesellschaft für Kybernetik [no. 1]
Pentagram Research Centre Private Limited [no. 43]
PSS: Polish Systems Society [no. 23]
SDSR: Slovenian Society for Systems Research [no. 25]
SESGE: Sociedad Espanola de Sistemas Generales [no. 13]
SGN: Systeemgroep Nederland [no. 2]
SESC: Systems Engineering Society of China [no. 21]
The Cybernetics Society [no. 9]
KSSSR: The Korean Society for Systems Science Research [no. 22]
The Learned Society of Praxiology [no. 16]
The aim of the Sixteenth IFSR Conversation in 2012, held in St. Magdalena, Linz, Austria in April 2012, was to continue the tradition of Conversation that had been established in 1980, stressing face-to-face discussions on the chose topics. The overarching theme for the conversation was how to reposition systems thinking in a changing world both with respect to scientific research and practical applications, in view of historical roots and the precarious situation of our environment.
The deliberations of the 4 teams supported the over-all theme in different ways:

The Conversation was able to build on previous and ongoing work within the member organizations of the IFSR. The outcome of this Conversation, while at a high conceptual level, also supports and encourages further practical applications through individual member activities.
The Conversations essentially followed the successful scheme used in earlier Fuschl Conversations as devised by Bela H. Banathy in 1981. 30 renowned systems scientists and systems practitioners from 9 countries took part in this 5-day cooperative effort. The outcome of the conversation is summarized in 4 team reports plus several contributed papers. A short description of the IFSR’s activities completes the proceedings.