Proceedings of the IFSR Conversation 2012, St. Magdalena, Linz, Austria
Four Thought Patterns in Support of the Systems Approach
James Martin
Figures © J. Martin; reprinted with permission
I have a strong interest in characterizing the “nature” of systems to facilitate the creation of systems for the betterment of mankind. I have developed four thought patterns (or frameworks, if you will) to assist in the characterization of systems:

Each of these is summarized below. These have been found helpful in creating more successful systems since they enable better systems thinking about the problem situation and corresponding potential interventions in the problem space. 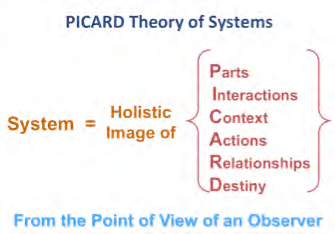 1. PICARD Theory. Systems might be composed of things that are real, but this does not necessarily mean the system itself has a reality of its own. The system is a particular set of attributes of a collection of things that interact or relate to each other in some manner. Since there are an infinite number of variables and constants associated with any one thing or collection of things, then it does not make sense that the “system” is all of these attributes. You must choose which attributes are of interest, which is another way of saying that we have a “system of interest.”
The choice of appropriate attributes to consider in the SOI entails the use of systems thinking. The PICARD theory (or systems thinking framework) is a way to characterize the different categories of “stuff” that can make up a certain system of interest. PICARD stands for parts, interactions, context, actions, relationships, and destiny, as illustrated above. (Martin 2007)
2. The 7 Samurai Framework. There are seven categories of systems that interact with each other as shown below. The main system to be engineered is the Intervention System (S2) that will be designed to solve a real or perceived problem. The Intervention System will be placed in a Context System (S1) and must be developed and deployed using a Realization System (S3). (Martin 2004)
The Intervention, when installed in the Context, becomes the Deployed System (S4) which is often different in substantial ways from the original intent of the Intervention. This Deployed System will interact with Collaborating Systems (S5) to accomplish its own functions. A Sustainment System (S6) provides services and materials to keep the Deployed System operational. Finally, there is one or more Competing Systems (S7) that may also solve the original problem and will compete for resources with your Deployed System. All seven systems must be properly reckoned with when engineering a system. The 7 Samurai framework can lead to a more holistic application of SE process, methods and tools. 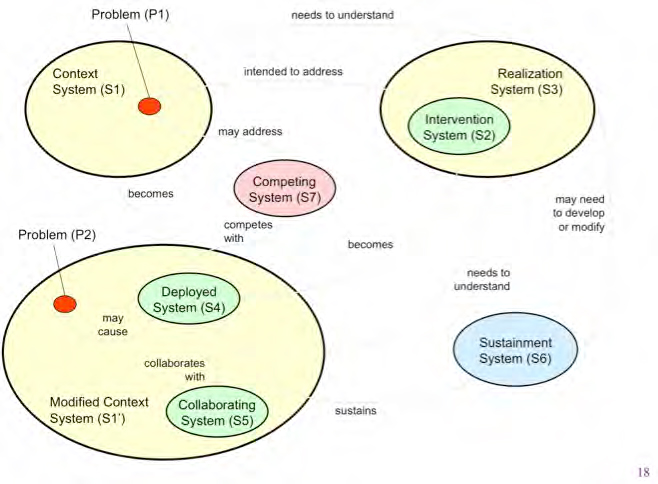 3. PMTE Paradigm. There is an intimate, supporting relationship among the PMTE elements shown below. These elements must be consistent with each other, and must be well integrated and balanced to achieve the greatest benefit from systems engineering practice. A process is executed using methods suitable for each process step. In turn, each method can be supported by one or more tools. A tool must be supported within a particular environment.

When the PMTE elements are not well balanced with each other this can often lead to “misfires” in the system creation effort. When introducing changes to any layer it is often necessary to make adjustments in the other layers of the PMTE stack.
4. Knowledge Pyramid. Many systems exist to help us increase our knowledge of the world in one way or another. Systems engineering needs a better way to understand how systems help or hinder the creation of knowledge. The Knowledge Pyramid was developed as a reference model to facilitate systems analysis with respect to signals, data, information and knowledge. (Martin 2006) Some systems do all their work at one level while other systems might span several levels. This pyramid has been especially helpful in understanding how to engineer enterprise systems since enterprises tend to operate in the upper half of pyramid. Technological systems usually operate in the lower half of the pyramid. (Martin 2006) 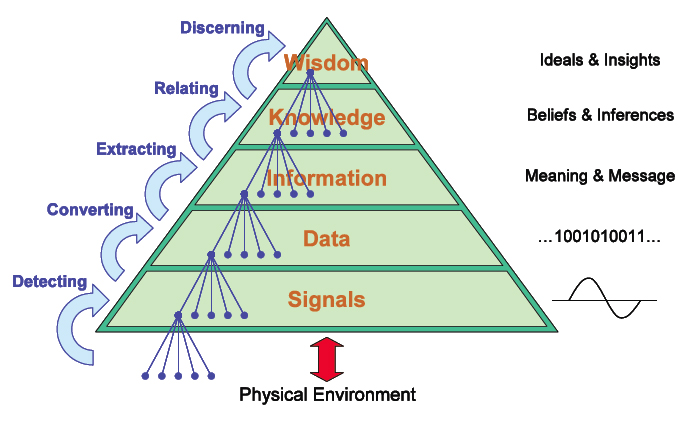 Summary. These four “thought constructs” have been found to be helpful in doing more complete, consistent and correct systems thinking. These are useful additions to any SE toolbox alongside other common tools and principles like the Zachman framework, GERAM (generalized enterprise reference architecture and methodology), STEEPLED (social, technological, economic, environmental, political, legal, ethical, and demographics), POSIWID (purpose of a system is what it does), IWKIWISI (I will know it when I see it), DOTMLPF (doctrine, organization, training, materiel, leadership, personnel, facilities), etc.
References
Martin, J. (1994). “The PMTE Paradigm: Exploring the Relationship between SE Process and Tools,” INCOSE Symposium.
Martin, J. (2004). “The Seven Samurai of Systems Engineering: Dealing with the Complexity of 7 Interrelated Systems,” INCOSE Symposium.
Martin, J. (2006). “Using the Knowledge Pyramid to Characterize Systems,” INCOSE Symposium.
Martin, J. (2007). “Systems are Imaginary—Systems are Not Real: On the Nature of Systems Thinking,” INCOSE Symposium.
By Gerhard Chroust