IFSR Newsletter 1994 Vol. 13 No. 1 March
Dr. Stephen Sokoloff
More than fifty years ago Raoul H. France died and it’s no wonder that orthodox scientist are still trying to bury him. He is occasionally revered as a pioneer systems thinker and ecologist and as one of the fathers of bionics, but many of his ideas have been conveniently swept under the carpet. Today they seem even more out-of-step, more utopian, than they did during his lifetime. For example he envisioned a science that would serve as a major cultural force, and not just as the private domain of specialists. That’s why he ultimately left research and ended up devoting himself to popular scientific writing – a decision that certainly didn’t endear him to his colleagues.
The science of decay [2]
Ever the unconventional thinker, France dedicated six years of his life to a field which others considered repugnant. In 1906, when he initiated his work, nothing was known about the microscopic denizens of the soil. Bacteria were regarded as nasty little creatures which inflict mankind with death and disease. Although it was assumed that some of them dwell in the earth beneath our feet, nobody knew – or wanted to find out – anything about them. The fertility of the soil was regarded as purely a matter of chemistry.
Until then, compost production had been a trial-and-error procedure. France’s studies gave it a sound scientific foundation. The topsoil resources of our planet were and still are being squandered, but the new discoveries facilitated the conversion of garbage into organic fertilizer for humus rejuvenation. Besides, France warned at a time when there was no widespread interest in environmental protection that mankind, by destroying nature, was digging its own grave
Plants as inventors [3]
Another phase of his work began when he turned to nature for inspiration. The success of a project hinged on his being able to scatter grains uniformly over a surface, but none of the devices he tried out was able to accomplish the task to his satisfaction. Then he reflected that plants have been confronted with basically the same problem for hundreds of millions of years. After all, spores or seeds which land too close together compete with each other for nourishment, water, light and growing space. France decided to investigate how flowers deal with this constraint, an approach that enabled him to make a breakthrough. On the basis of the poppy capsule he designed a salt-shaker which did the job and was granted a patent. Thus the science of bionics was born and the world of living things manifested itself as a vast open-air museum of technical marvels. 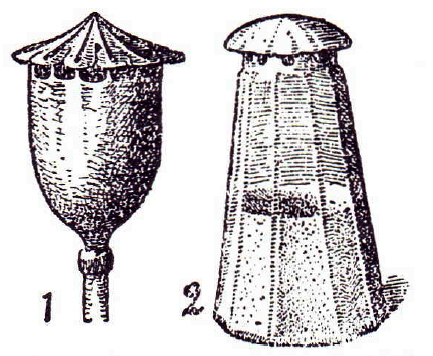 The insect-eating pitcher plants of Asia were one of France’s main examples of the technical
accomplishments of plants. They pump liquid into their ‘pitchers’. 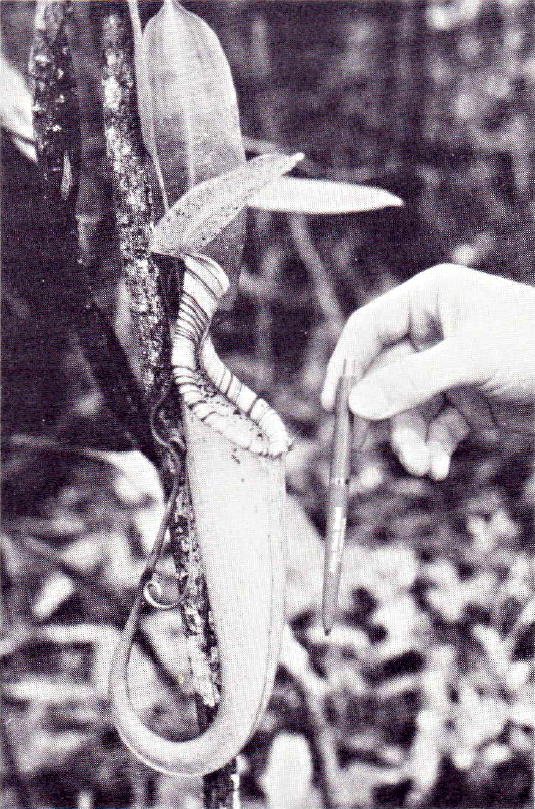 Not by bread alone [4]
The elucidation of isolated phenomena and processes is for many scientists the only goal. This was not the case for Franc6 the universalist thinker, the philosophical biologist. He wanted to determine the ultimate value of research.
Man does not live by bread alone, he decided. Scientific knowledge is no less essential than food, clothing or shelter, but it must be made generally comprehensible and brought into relationship with practical necessities. He encouraged his readers to enlist their “knowledge of the design of the natural and human world and its laws as a constant companion and advisor”[1]. Naive, poorly informed individuals are, after all, easily victimized, and they make decisions that have dire if not fatal consequences, for example concerning health matters or partnership problems.
Today, as in France’s time, narrow specialization is the surest way to academic success. France chose to depart from this straight and narrow path for the greater benefit of mankind. That is one of the many reasons why he deserves to be remembered and to be honored.
[1] France, Raoul H., “Der Weg zu mir’, Alfred Kroner Verlag, Leipzig 1927
[2] France R.H: “Das Edaphon”, Munchen 1913, new impression: Franckh’sche Verlagsbuchhandlung,
Stuttgart I 959
[3] Francd R.H: “Die technischen Leistungen der Pflanzen”, Veit&Co., Leipzig I919
[4l Francd R.H.: “Das Buch des Lebens’, Ullstein Verlag, Berlin 1924
[5] Francd R.H: ‘Die Pflanze als Ertinder”, Kosmos Verlag, Stuttgart 1920
A Reply to: “Raoul France’s Heritage a Nightmare for Specialists” by S. Sokoloff
Dr. Stephen Sokoloff’s reply: lnterdisciplinary – New Cages
By Gerhard Chroust