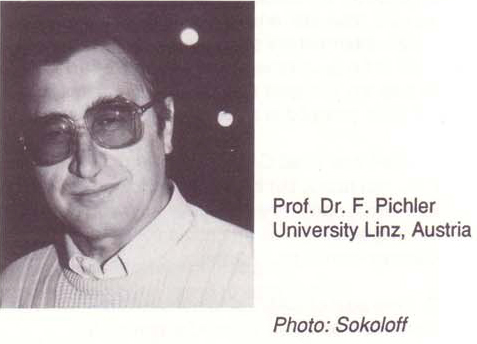 QUESTION: Professor Pichler, you are a leading proponent of CAST. Of what practical value is this branch of systems science?
FRANZ PICHLER: CAST is concerned with the development of software tools which are based on systems theory. These aid in the designing of complex technical systems. Some important applications of CAST can be found in communication and automation engineering. It can, however, also be used in other fields of the natural, social and economic sciences; wherever one is dealing with the construction of models.
Q: What precisely can one do with CAST?
F.P.: lt is comparable to a tool making machine which can be programmed to carry out different production processes. CAST-software provides the designer with tools that are as universal as possible. Using them, he can improve the quality of his products.
Q: Can you give me a practical example?
F.P.: Let’s take a look at my own field – the design of computer chips. ln orderto plan the complex electronic circuits on these chips, computer-aided-design (CAD) tools must be employed. ln the course of time very sophisticated CAD-systems have been devised for this purpose. However, they have not been well-planned from a systems-theoretical viewpoint. They could be considerably improved.
Q: What precisely does this mean? Without CAST would one be compelled to plod through each step of the chip-designing process?
F.P.: No, that is an exaggeration. CAD-systems are by their nature universal instruments; a great deal of CAST-work has been invested in their conception. By consequently employing CAST we can, however, enable the elimination of certain intermediate steps which would otherwise have to be accomplished by trial and error. With its help the designer can, based on a scientific analysis, proceed in a direct, deductive fashion.
Q: Does one need CAST to design models?
F.P.: Not really, but it enables us to construct very exact ones, ones of a level of complexity much greaterthan is attainable solely with common-sense procedures.
Q: One goalof CAST is to enable transformations between various homomorphic systems, for example between finer and cruder ones. How can this be accomplished?
F.P.: According to the top-down scheme one designs rough models first and then refines them. Such relationships between finer and coarser systems are designated as homomorphisms, whereby the cruder ones perform in essence the same tasks as the more exact ones, only with reduced precision. It is necessary to maintain a certain consistence between the models; they cannot contradict one another. Demonstrating the correctness of such transformations is an aim of systems science. We can take as an example the motions of a finger. For certain mechanical tasks that can be carried out by robots a crude model would suffice. lf one wanted to evaluate the effects of medicines on individual muscles, however, a more precise one would be necessary.
Q: Given CASTs practical importance, why does it have such a low acceptance among engineers?
F.P.: Nowadays engineers are highly specialized. On the job they have increasingly little time to acquire theoretical knowledge. Therefore it is difficult to arouse their interest in CAST. Only in laboratories in which tools are designed can an enthusiasm for such theoretical fields be expected. Engineers who only use tools, and don’t construct them themselves, can at best communicate their problems to us and request that we make changes.
Q: Professor Pichler, do you believe that CAST can help to ameliorate our everyday lives and to bring about improvements in such areas as peace research, driver training and city planning?
F.P.: Yes, I do. Many useful CAST-systems could be realized with the help of multimedia computers. These enable one to incorporate photos, videos, acoustic signals, to call upon speakers from various conferences. That would open enormous new possibilities for planning instruments, especially in the social and economic sciences. However without an appropriate theoretical basis such systems end up being little more than computer games. One example is the training systems for pilots. The learners sit in a simulated airplane interior and “fly” from airport to airport. On the computer video they see essentially what the pilot perceives from the cockpit window. ln this way they can be trained to master emergency situations without having to crash-land three times. This technology is already highly sophisticated. However the same kind of system will in the future become more generally available. For example, its basic principle might be adapted to driver training. Employing CAST, such programs could be conceived in a truly comprehensive fashion, so that they not only incorporate the kind of material already used by driving schools but also police suggestions, ethical and environmental considerations, etc. This is only one example of the practical benefits which would accrue to mankind through a consequent application of computer aided systems theory.
The |FSR-Newsletter would like to thank Prof. Franz Pichler for his time and patience.
lnterview conducted and edited by Dr. Stephen Sokoloff
By Gerhard Chroust