IFSR 1998 Newsletter Vol. 17 No. 3/4 December
Asilomar 1997 and Ljubljana 1998 Dialogues
Heiner Benking
Email: benking@faw.uni-ulm.de
How can people go beyond the “Battle of Perspectives”, to see where other persons are, physically and conceptually, to find a way to reach them, co-create and encourage voice in self-organizing dialogue?

New Places for Spaces
Mothers in all cultures have told their children to make words solid and to use verbs to bring them to Life. The reason? We need to share meaning in order to gain understanding and to cope better. This is done by sharing, translating, and transforming meaning, by using stories, metaphors, and analogies and so allow others to follow from the real to the abstract. And that is what this trend-letter is about, the ways to bridge the real with all these new artificial “tele” and “virtual” worlds so that we can not only live in and with them, but return to the virtue of listening and imagining more clearly what others see and feel.
Fact is, that we not only share one sky (as some Indian tribes say) but that we have an increasing number of skies above us and we are not sure who is seeing which clouds. The confusion of having lost ground and bearing has led to a number of very dangerous metaphors like: THE END OF GEOGRAPHY, THE END OF DISTANCE, THE SECOND FLOOD or THIRD BOMB. But the opposite is true, it is not the end of anything we already know, but a new open sky we just may not have come to grips with yet. Instead of believing that after CULTURE there will be CYBERCULTURE, we have to make sure that the new is inclusive and additional, and is connected to our living world.
It is typical that these trends of separation of the new individual and collective virtual worlds from the real world started with fiction. The science-fiction writer William Gibson “created” an extensive “electronic space”, one without boundaries on context or content, … an open ended universality, a chaos / Babylon. This is in line with the contextless subjectivism, meaningless and endless “lost in space” syndrome of post-structuralism. It is a nightmare for understanding and coping, for us, but more so, for our children. When thinkers like Pierre Lévy “postulate” that such a „Modern or Second Flood” Culture is unavoidable and irreversible, then we are really in a bad film. We should not only change seats, but the script.
The Leverage Space
The necessary change in perception and attitude could happen by building a ‘new’ culture on the old one, because the new mediums do not substitute the old needs of living, sharing, and creating. But the result would still be a new ‘composite’ culture. This happens when we hark back to the original meaning of the word “kybernetes”: a steering space – or, in a positive sense, an order or control space in the sense of Norbert Wiener. He had systems in mind and problem solving; something which helps us, gives direction and makes us not afraid or shocks us into isolation… and cocooning.
The trick – see above – would be to take ‘space’ for real, and like Poincaré, create with abstract or imaginary axes/dimensions new sharable action, communication, and orientation realms. These spaces need to be considered “real” and “synthetic”, extensive spaces which can be embodied, made solid, augmented, and blended. They are immersive and collectively explorable environments (analog to the “new” CVE’s –collective virtual environments- which are connected to the real world in order to allow orientation and a flow of meaning. The design we are talking about here was done in 1990, using a combination of spaces which help us blend and collectively enter into abstract subjects; just the same way as we are used to in physical object space, thereby bridging presentations, representation, and annotation. 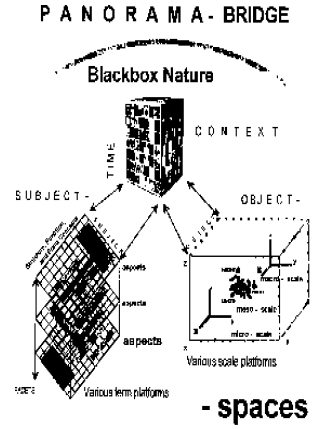 Blackbox Nature and the Cognitive Panorama
More has been written elsewhere about transcending boxes of thinking, the fidelity and merging and morphing of models and metaphors, or “jumping” over the fences of the “res extensa”.
Given the above as a ‘second step‘, something has to come first:

Shared Conversations and embodied flows of Meaning and Assumptions
At the 1997 autumn ISI-Asilomar Conversations meeting, we posed the question of how to built community and care about the fundamental building blocks — by using good sound exchange and understanding. This and the recent ‘David Bohm Dialogues’ in Ljubljana were based on the work of Anthony J. N. Judge, Brussels, and Heiner Benking. It is a form of “Giving Voice” — cultivating listening and empowerment by giving freely floating time credits. A „step towards civilized dialogue” as it was called. It is applied in new forms of conferences and roundtables, inter-faith dialogues and peace-making efforts.
Such a self-organizing form of dialogue, which is transparently visible, evolves and makes obvious who and how people manage or steal time (from others) for vested interests and hidden agendas, or only for ego-cultivation -without eyes and ears for others. – the typical “talkers” as David Bohm called them. All these “stiles” and “strategies” become more obvious at real or shadowy round-tables.
Heiner Benking, Ulm
benking@faw.uni-ulm.de
heiner_benking@hotmail.com
http://newciv.org/cob/members/benking/
http://www.uia.org/guests/benking/