IFSR 1998 Newsletter Vol. 17 No. 3/4 December
Dr. Stephen Sokoloff
Stefan-Fechter-Weg 1/49
A-4020 Linz, Austria
Most of us accept the inevitability of aging. We experience the fact that mechanical devices wear out and break down in the course of time, and we see that people and animals grow old and die. It therefore seems self-evident to us that the lifetime of organisms, like that of material objects, is limited.
Biological systems, however, are endowed with the ability to repair themselves. They must be able to do so, because flaws rapidly accumulate in many of their components. After all, some mistakes are made during the assembly of genes and proteins, and these macromolecules are subsequently damaged by ultraviolet radiation, oxidation, etc. It has been shown that organisms could not survive as long as they do if they were not able to eliminate some of these defects.
As a matter of fact, biological material is potentially immortal. Amoebas and most other one celled organisms simply go on growing and multiplying forever. So do human cells that have undergone cancer-like transformations. They maintain their vitality when they are held in laboratory cultures, whereas normal cells slow down and eventually die after a certain number of divisions. A rejuvenation occurs in fertilized egg cells, but their sibling cells – the parent organisms – continue their slide into senescence.
Optimal utilization of repair potentiality
Gerontologists generally believe that considerable resources must be “allocated“ to keep biological systems intact – repair enzymes, antioxidants, efficient mechanisms for the elimination of accumulated waste materials. Under natural conditions, however, life is generally short and brutish, and very few individuals ever reach an advanced age. It is, for example, realistic to assume that in a certain hypothetical species 99 % die within three years of birth as a result of predation and disease. There is no reason why organisms such as these should be designed for permanence.
The goal of evolution seems to be an optimal utilization of resources. Just enough mending is done to enable an animal to attain its normal lifespan. Damage-preventing mechanisms and fixing-up processes are far more efficient in long-lived species than in short-lived ones. For example the amount of repair synthesis of the hereditary material DNA is correlated with the longevity of its donors. Compared with rats it is three times greater in dogs and six times greater in horses. Studies on substances such as SOD that afford protection against oxygen free radical damage yield similar results. The SOD level correlates with the lifespan in many species.
In view of the astounding complexity of biological systems it is unlikely that scientists will discover the fountain of youth in the near future. However once the processes that lead to senescence have been thoroughly elucidated we will be able to devise strategies to inhibit them. Recommended regimes might involve dietary measures, vitamin and mineral supplements, etc. Eventually physicians will probably even be able to give us injections of life-prolonging genes.
I am sure that man will in the course of time attain a certain degree of control over basic ageing mechanisms. He will then be able to considerably prolong human life. That prospect is certainly enticing, but slowing down senescence will undoubtedly give rise to a great number of social, moral and political problems. 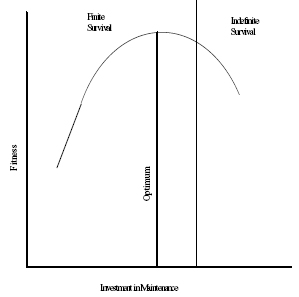 Senescence in Biological Systems:
Why Can’t We Live Forever?

H. Benkings Favourite Poetry:
Whoever imagines mental barriers which actually do not exist and then thinks them away, has understood the world.
As space is entrapped in geometry’s network of lines, thought is caught in its (own) inherent laws.
Maps make the world comprehensible to us; we are still waiting for the star-maps of the spirit.
In the same way that ambling through fields we risk getting lost, the spirit negotiates its terrain.
Friedrich Rückert, Wisdom of Brahmins
By Gerhard Chroust