IFSR Newsletter 1999 Vol. 18 No. 2 July
Gerhard Chroust
Around 1960 Cybernetics was the path into the future. Numerous cybernetic machines, usually names after animals were being constructed to study phenomena of artificial intelligence.
Claude E. Shannon built a maze-solving mouse to study a labyrinthian problem – telephone switching systems: A call must make its way to its destination by the shortest possible path. The device contains a maze with fences that could be arranged to create various paths. The finder, built as mouse named ‘Theseus’, is moved by a magnet. It gropes its way from field to field and stores the direction, if it is possible to step on a field. If there is a wall, it will turn around and will try the next direction. Unless the mouse comes in a loop it will find the goal. It escapes from a loop through a pedometer which counts to the highest possible number of steps. The way from the entrance to the goal is stored in form of the direction in which the mouse left the field. One can put the mouse everywhere in the maze, it will follow the stored direction to the goal. Only if it comes to a new field or if the maze is changed, it will use a search algorithm, otherwise it will use the stored information.
At the Technical University of Vienna Richard Eier, one of the assistants of Heinz Zemanek re-build the maze-solving mouse around 1959. He improved Shannon’s method by applying the idea of Ariadne’s thread. The mouse marks each field with the path information, using the concept of Ariadne’s thread. When winding up in a dead end it retraced, duplicating Ariadne’s thread: Whenever the mouse finds an exit from field where one tread leaves and another returns, it recognises a dead end. Similarly the mouse is able to detect circles in its path. 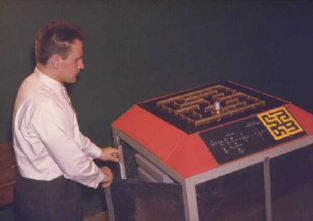 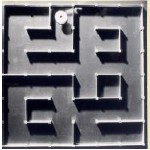 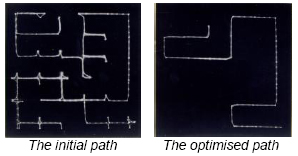