IFSR Newsletter 2000 Vol. 19 No. 1 July
Gordon Dyer (Coordinator) (UK) g.c.dyer@open.ac.uk
Sabre Brahms (US) sabejams@pacbell.net
Yoshi Horiuchi (Japan) horiuchi@u-shizuoka-ken.ac.jp
Lynn Jenks (US) clj29@aol.com
Gordon Rowland (US) rowland@ithaca.edu
This report summarises the progress made by the so-called Y3K Group during the 10th Biennial Fuschl Conversation. The idea for naming the group had been suggested by Gordon Dyer and Gordon Rowland in March 1999, triggered by a climate of concern generated over the so-called Y2K problem – the fear that a large number of the world’s computers might crash on the changeover from 1999 to 2000. In the event, the predicted Y2K disaster was largely a non-event – a technological problem was cured by a technological fix. 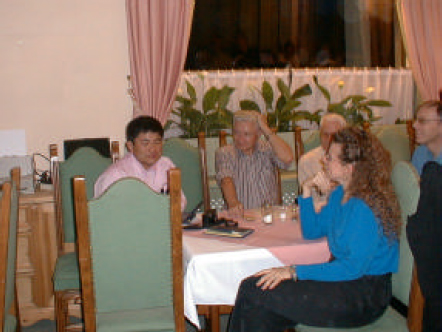 In the view of Rowland and Dyer, this simple technological problem was much less problematic and less serious than the issue of “what would we as systems designers wish to see for mankind for the Year 3000”. Our consciences and senses told us that the world that mankind had created was in a sorry mess. For instance, the gross inequalities of wealth, undeserved power and opportunities that still exist between nations and peoples, continuing wars and terrorism; a global spread of horrific diseases, drug related crime and perhaps most worrying the concerns with Planet Earth itself as it suffers from pollution and global warming. Thus Y3K became a metaphor for a much more desirable future. The choice of Y3K to focus the vision was deliberate in that it is far enough away for it to be removed from our current biases and to be NOT predictable on the basis of our current knowledge and technology. With a systems design approach we have the chance to create a vision of what we want and then begin a design process towards that vision. It also forces us to think and not rest on the assumption that everything is too difficult and that nothing can be done. Something ought to be done if we and succeeding generations take responsibility to continue to design the future and not just let the future happen. Yet too, our work must be framed within a guiding principle of system design that “it is unethical” to design a system for someone else. At best we can provide an outline, a set of markers, to help current and future generations to follow.
The aim for an outcome from this initial Fuschl conversation could not be very ambitious. We hoped that we might be able to achieve some markers for action in our lifetimes that we might be able to begin today which will take us towards a vision of a more desirable vision of global humanity in 3000 and not away from it.
All members of the Y3K team expressed satisfaction at what they had gained from the week. At the start of the conversation no-one had a very clear idea at the direction that would be taken or what to expect as outcome. So there was a collective sense of surprise at the feeling of progress we shared. We found some very rich trigger questions to stimulate fundamental reflection on what it means to be and to remain human, and whether the human species has an immutable connection to the Planet Earth through its place in a complex “chain of being”.
We were able to begin visioning for 3000. We did this through consideration of what we would miss from our heritage and the present, if it were not still to be found, or be disappointed with if it were still not achieved, or have ambition for, by that future. Our conversation was not without obstacles. Given the topic and the variety of perspectives that the team represented it was not surprising that we needed to take stock and review our conversation process from time to time. We found it impossible to reach consensus on a set of assumptions to make for 3000 but we by-passed this difficulty by asking a different but related question.
An exploration of an Okinagan model of group discussion coupled with an “I in We” and “We in the World” levels of systems perspectives gave fruitful insights towards six principles which constitute an EGS for the Year 3000 or similar long term future. These were:
Movement towards WHOLENESS and greater levels of complexity
BALANCE (in emphasis and in elements informing each other) among perspectives and orientation
Preserving and increasing DIVERSITY of human and other organisms
Enriching human experience: RICHNESS
Increasing dispersion of benefits: DISPERSION
HARMONY among the five principles given above
We also identified some markers in terms of desirable behaviour patterns for the Year 3000. These desirable behaviours provide a basis for considering future education and human development programmes, which will be worthy of exploring in future conversations. A search for a richer systems vocabulary and language base was also identified as a direction for future work.