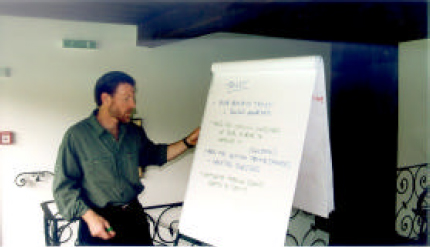 The pre-conversation phase started in February 2000 with an introduction among the participants of the group. Gary Metcalf proposed to deal with the subject “Awareness and Systems” not on the level of theoretical reasoning about “What is awareness?”, but through using concrete examples of political, economic and ecological systems through newspaper or journal articles, which might help to find general principles of about awareness within social systems. After some negotiation the group decided to deal with the very up-to-date problem concerning the “Jörg Haider issue” as an example within a political system (see note at end!). The participants were asked to bring some newspaper clips concerning that issue with them. Günther prepared a paper about the conflict theory of Gerhard Schwarz, which could be used as a theoretical background for analysing the “Haider saga.” Charles provided a great deal of information (and experience) in systems theories. Antonio information from economic systems, especially as described by systems dynamics. The question of modelling systems, and of what this has to do with the awareness of systems, was an issue throughout the conversation.
The conversation in the group at Fuschl started with an input of Charles concerning several dimensions and triggering questions concerned awareness (of social systems). Different facets of the “Haider saga” were provided mainly by Günther, interrupted by short phases of theoretical reflection. It turned out that both the rise of the Freedom Party under Haider (from 5% of voters in 1986 to 28% in 1999) and the reactions about this both within Austria and within the European Union are deeply rooted in a conflict scenario with some striking inner logic. On Tuesday afternoon the issue was postponed for a while and the focus was shifted to the question of modelling economical systems, to investigate what connections might be found between political and economic systems. 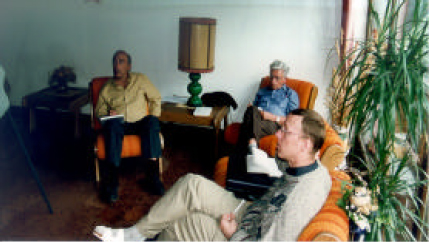 On Wednesday morning the Haider issue reappeared. Questions of how it might possible to more concretely model this situation, and a proposal of the factors involved, were introduced by Antonio. The group ended up with some insights about the driving forces behind social (especially political) systems and the fundamental difference between qualitative and quantitative modelling.
On Thursday morning Antonio brought in a concrete concept of how the Haider issue could be transformed to a semi-quantitative model. After some discussion about the implications of what actually making such a model would imply we tried to conclude about the finding we made about inducing awareness within social systems. Two new systems concepts were introduced by the group: systemic integrity and reflective systemic properties. An extensive reflection upon the whole progress of the conversation, including some very deep conclusions about the evolution of awareness within social systems, finished our group work at Fuschl.
Note: There was a worldwide outcry about the fact that Austria‘s “Freedom Party” (FPÖ, leaded then by Jörg Haider, which got about 28% of the votes at the national election for Austrian Parliament in Autumn 1999) formed a coalition with the “Österreichichische Volkspartei” (ÖVP, a Christian democratic party with almost exactly the same number of votes as the FPÖ), thus expelling the Socialist Party (SPÖ, 36%) after 30 years from the position of a “Prime Minister Party”. Even before the coalition between FPÖ and ÖVP had even be signed, the other 14 countries had decided upon formal coordinated bilateral sanctions against the Austrian government, saying that an extreme right wing party (some even compared Haider with Hitler) should not be allowed to be in the Government of an European Union member country. 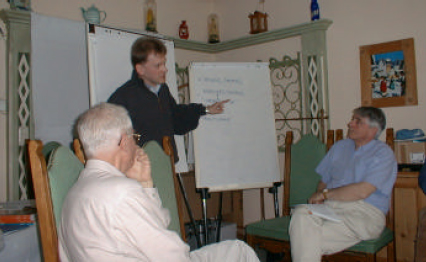