IFSR Newsletter 2000 Vol. 19 No. 1 July
Soeren Brier (Coordinator) (DK) sbr@kvl.dk
Mieczyslaw Bazewicz (PL) bazew@pwt.wroc.pl
Gerhard Chroust (A) gc@sea.uni-linz.ac.at
Allan Combs (USA) combs@unca.edu
Magdalena Kalaidjieva (BG) kalaidji@mbox.cit.bg
G.A. Swanson (USA) GASwanson@tntech.edu
The objective of the conversation was to discuss the foundations of information science in a broader socio-technical context. Based on Soeren’s manuscript ‘Cybersemiotics – a Trans-Disciplinary Framework for Information and Communication Studies’ the group began the discussion on the limitation of the information processing paradigm.
The limitation of this paradigm and the influence of a strong AI research program in dealing with the meaning aspect of human language communication were discussed, especially from the viewpoint of syntax versus semantics. It was agreed that a true transdisciplinary theory of information, cognition, and communication should be able to encompass not only technical communication (cf. Shannon’s theory of communication) but also animal sign communication and human communication through language. The discussion of what actually constitutes a language, revealed that social sciences and computer sciences seemingly use different definitions. 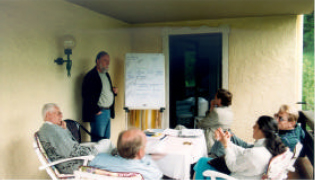 We specially concentrated on natural languages; they demand not only a generative and context-sensitive syntax but also context-sensitive semantics (pragmatics). It was pointed out that basic characteristics of biological systems like autopoietic structure and motivational mental processing seemed necessary to establish any kind of semantics. But the motivational structure of living system alone seemed not to be sufficient to establish a meaning-structure at the conscious level. So we found it necessary to include the psychological and social level of intentionality including motivational ordering of embodied metaphorical concepts.
We established that the understanding of messages could not start with an objective concept of information in nature but as a prerequisite has to include humans in a social structure comprising a body and psyche with inner (emotional) life. The group’s attention was therefore directed to the discipline of semiotics that deals with how signs get meaning in the context of living and social systems (biosemiotics).
Based upon Charles Sanders Peirce’s triadic system levels (syntax, semantics and pragmatics) pragmatic and transdisciplinary semiotics was focussed upon. It is based on a philosophy of 3 categories, the firstness, secondness, and thirdness based on a revision of Kant’s philosophy. But contrary to Kant’s mind-based categories Peirce’s categories each represents a fundamental aspect of mind and nature and cognition. Special interest is that Firstness represents qualia and feeling as a basic feature of reality existing by itself in an unmanifest state. Objects are only secondness and they are considered along with force and will as constraints on our perception of reality. Thirdness represents mediation between firstness and secondness. It is the habits of nature and mind that leads to understanding. The process of semiosis (signification) is modelled over this scheme, where the primary sign or the representamen (firstness) refers to the object (secondness) through establishment of an interpretant in thirdness.
This process of signification continues throughout history in a sign-web. So every sign is connected to other signs in a sign-web. An object can be a representamen to somebody else. An interpretant can be the representamen for somebody else. So your interpretation can be a sign of your understanding of a message for others. The meaning of a sign is what it does in the biological, psychological and social systems. Peirce’s criterion of meaning is pragmatic. The meaning of a sign is constantly evolved/revised through the ongoing social dynamics of the web of other sign it is connected to, such that the production of meaning is a continually evolving process. In this context the basics for the construction of a second-order knowledge base via units expressed in natural language were shown. 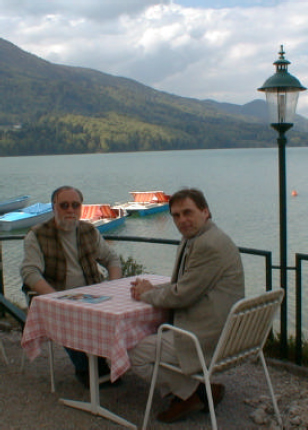 A. Combs, S. Brier, Design of a Disciplined Inquiry on the Foundation of Information Science, , Fuschl Conversation 2000, IFSR Newsletter 2000 Vol. 19 No. 1 July

This process is not only working at and with the social communicative level, it is working at all three levels at the same time: the social-communicative, the mental-psychic, and the biological-autopoietic, producing embodied socially meaningful concepts. The flow of sign in society can be seen as going through or being expressed by various specialized channels (what Luhmann calls ‘generalized media’) such as money, power, science, art and love. Each functioning on the basis of its own reduced code (i.e. representation of reality). 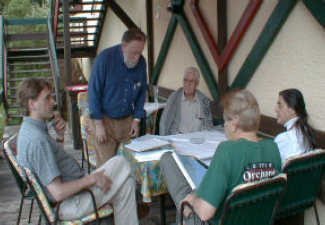 The attention moved to the immense influence of money-markers in the communication of power in modern society. The increasingly faster development of money marker systems (electronic commerce!) takes power both from the brute-force systems and the other information systems. Further studies of this aspect are needed.
At this point a general discussion of hierarchies was conducted. Several types of hierarchies were offered to the group: the seven layer ISO/OSI model of computer communication, a morphological systems inquiry model with 5 levels (from hardware to human activity) and a 7 level model of equilibrium and processes (from atomic structures to social activities). An elaborate theory of hierarchies to unfold the different components and layers of information and communication systems was also discussed.
In an attempt to consolidate the findings a map of relations was drawn: Consciousness at the core level is associated with sensations such as the sensation of tea (firstness), which build on the experience of tasting of tea with pleasant feelings and emotions (for consciousness, secondness) that give rise, through images, to reflections, thoughts, concepts, and languages (thirdness) about the nature of the tea – all of this occurring at the level of conscience experience. Such concepts can be expressed through speech or written language codes. These can be communicated via Shannon-Weaver-type channels of communication by appropriate coding and transmission from senders to receivers using any appropriate technology for the channels such as encoded pulses of energy, including feedback to ensure correct transmission. As long as the meaningful social context and praxis the original uuencoded concepts related to is remembered as where “the difference that makes a difference” was established, their meaning can be established.
The basis for this core consciousness and intersubject communication is probably established in the early development of hunter/gather society that functioned in migrating bands with social work division that allowed for hunting and raising of children with still growing brains. This biological, sociological and psychological organisation and the feeling of communality and common linguistic communication system seems to be the process creating the self-conscientious social-linguistic human being we know to day. The early stages of language development seem to have been decisive for later development of the brain.
The consequences with respect to the future for development of computer communication and the Internet is that they should be designed as to promote social sharing of meaning, values, and collective consciousness on a global scale in order to heal some of the fragmentation of modern society arising from some of the extreme developments of individuality of modern society.
The trust and corporation spirit making synergetic effort like the SETI-project of sharing PCs for computing analysis of noise from space in searching for extra-terrestrial intelligence was acknowledged, as was the immense intellectual exchange going on in a very helpful manner globally.
Information stress was a further topic. We have too much information, what we want (and need) is knowledge designed for our purposes.
The pro and cons of distance education were elaborated. The wonderful possibility to use universities and experts all over the world and exercising this chance when one has time was appreciated. But the lack of personal presence and the growing exploitation of family and free time were seen as a growing problem. Distance learning is often used to reduce expenses without realizing the essential function of personal dialogue for human education. It was also observed that students enter distance education with wrong expectations due to underestimating the real effort involved in following such courses. It is essential that the teacher get paid to have enough time to dialogue with the students and that at least two to three full-body meetings are conducted with the teacher for all, or at least among students living fairly near each other.
By Gerhard Chroust