IFSR Newsletter 2000 Vol. 19 No. 1 July
Arne Collen (Coordinator) (USA) acollen@saybrook.edu
Christian Hofer (A) ch@sea.uni-linz.ac.at
Gianfranco Minati (I) gianfranco.minati@iol.it
Nicholas Paritsis (GR) paritsis@med.uch.gr
Maria Pietronilla Penna (I) npenna@hotmail.com
The process of the conversation consisted of an initial phase to orient the team to the task, followed by agreement on a design to conduct the sessions over the four days together as well as in relation to the other conversation groups. The heart of the process transpired over the middle two days culminating in an integration of contents produced into a draft for the group report by the last day. 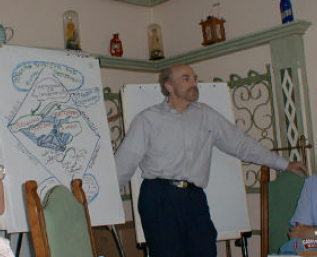 Implementation of the design the first day involved a divergent analysis of the key constructs in the theme: designing, system, human, and betterment. This phase was followed by a convergent snythesis toward reconstitution of the theme in more specific terms. The second day continued the reformulation of the focus, which subsequently led to the formulation of a set of 9 essential characteristics for designing systems for human betterment. The nine essential characteristics defined were: emergence, stakeholders, goal, diversity, creation, acceptance, co-evolution, continuation, and ethics. On the second and third day, these characteristics were then applied to six areas of application: education, systems therapy, the internet, consumer protection, usability interface, and research participant protection. The conversation moved toward closure by means of writing individually and in teams, then corroborating aspects of the group report, and finally planning the presentation of our process and results to all participants on the fourth day.
The content of our conversation focused on the difference between the idea of designing a system and designing a system for human betterment, designing a system and designing systems, and conversing as a design team and working openly with the co-evolutionary dynamics of conducting a designing process. We further noted betterment as a complex construct and chose to examine its importance as an emergent property. Taking into count the participation and acceptance of the stakeholders, who are also the designers as well as others who may be affected more indirectly, became salient influences upon our thinking throughout the conversation. Systems for human betterment meant an increase in personal satisfaction, but can also bring beneficial consequences at more collective levels of human organization. There were implicit sub-themes over the course of the conversation, for example, that betterments need to be accessible to everyone at the effect of the systems designed, and there is an ethics inherent in designing and the systems designed which likely needs to be made more explicit as the conversation progresses and the betterments emerge. 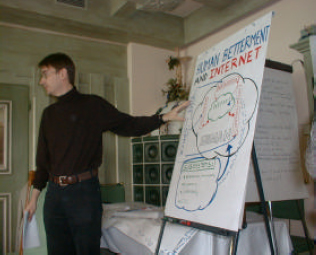 C. Hofer, Design of a Disciplined Inquiry on the Foundation of Information Science, Fuschl Conversation 2000, IFSR Newsletter 2000 Vol. 19 No. 1 July