IFSR Newsletter 2004 Vol. 22 No. 1 October
It was due to a succession of favourite coincidences that the scientific bequest of Prof. Dr. Ludwig von Bertalanffy, the founder of the General Systems Theory, has re-appeared and has been secured for the scientific community.
A small second hand book store in Buffalo, in the state of New York, the last home of Ludwig von Bertalanffy, was sold to another owner in its totality.
When the new owner made an inventory of his new acquisition he found in the remotest corner of the little shop six banana boxes with some books, letters etc. And he detected the name of Bertalanffy. Fortunately he remembered having seen an announcement of a 100-year celebration in Vienna for Bertalanffy.
The collection consisted of approximately 400 personal letters, several original manuscripts and a collection of books and journals. 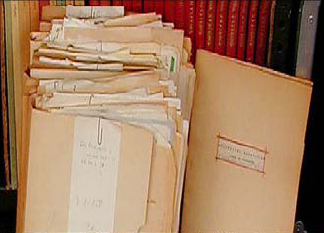 The valuable collection was publicly offered for sale. Realizing the danger of dispersion and loss plus inadequate preservation the IFSR, led by Gerhard Chroust, was quick in finding a proper archive for this precious find. Hectic activities ensued since the seller wanted to sell promptly.
With the substantive help of Prof. Wolfgang Hofkirchner, Technical University of Vienna, and the considerable financial support of the Bertalanffy-family in Austria it was possible to acquire the lot. 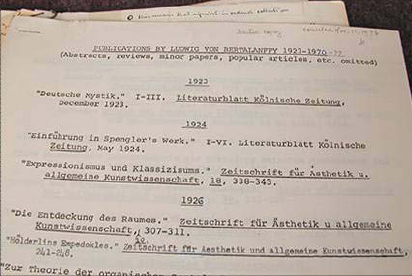 Ludwig von Bertalanffy, born on Sept. 19, 1901 in Atzgersdorf near Vienna, was a graduate in Theoretical Biology and from 1946 to 1949 was Head of the Zoological Institute of the University Vienna. In 1949 he immigrated to the United States. His last years, until his death in 1972 were spent in Buffalo, USA.
Based on biology he founded the General Systems Theory as a holistic, interdisciplinary view of systems in various disciplines and a study of their commonalities.
The complete collection will be preserved, analyzed and published by the newly founded „Bertalanffy Centre for the Study of Systems Science“ with the support of the Austrian Society for the History of Informatics.“
Summing up this success, Gerhard Chroust said:
The history of the acquisition of the Bertalanffy legacy shows the importance of international associations like the IFSR. Only by with the support of international networking and the personal involvement of many systems people this collection was kept together but was also put into the hand of responsible, competent scientist, who will honour it and make it available to the general public.
On behalf of the IFSR and the systems community I want the thank everybody involved, primarily the Bertalanffy family for their considerable financial support and Prof. Wolfgang Hofkirchner for his personal engagement. I am happy that the Bertalanffy legacy has found its way back to the country of his origin. “
G. Chroust
By Gerhard Chroust