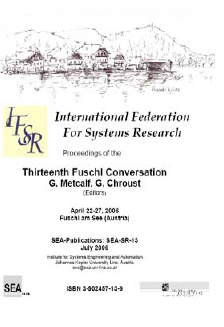 In April 2006 the IFSR sponsored the 13th Fuschl Conversation. Conversations originated as an alternative to traditional conferences, and out of the insight that most of the benefit for participants resulted from the discussions and conversations with one another rather than from the formal content or presentations. The initial format for the Fuschl Conversations was built around Social Systems Design, as espoused by Bela H. Banathy.
In 2004 it became apparent that Conversation teams in Fuschl had, through the years, begun branching into a wide array of systems topics, also adopting a variety of approaches to their processes. In essence, the Conversations were evolving, but without clear or specific direction.
The 2006 Conversation provided a time for reflecting on a number of themes: the Conversation process and how it is evolving; the state of systems organizations as they relate to the IFSR and to each other; and most importantly, the future direction and role of systems organizations collectively. We bring short reports from the teams, details can be found in the proceedings:
Metcalf, G. and Chroust, G.: Proceedings of the Thirteenth Fuschl Conversation, April 22-27, 2006, Inst. f. Systems Engineering and Automation, Kepler Univ. Linz, 2006, SEA-SR-13}, ISBN = 3-902457-13-9}, 68 pages
Copies (10 €) can be ordered from Institute of Systems Engineering and Automation
Kepler University Linz, Altenbergerstr. 69, A-4040 Linz, Austria-
gc@sea.uni-linz.ac.at
Contents of the Fuschl 2006 Proceedings

Our team formed to explore the conversation concept and associated methods in order to make specific recommendations regarding the future of Fuschl conversations. We considered whether and how such events should take place. Based partly on our own experience of the week, our answer to the former was an enthusiastic yes, and we proposed a new form of conversation that would extend Fuschl to local communities.
We arrived at Fuschl with unclear and/or mixed expectations. Some of us were aware of a perceived disconnect between the original Fuschl conversation goals and recent team activities, and the charge of making recommendations. Others joined the team purely to engage the general topic. We soon found common interests and developed triggering questions that would energize our conversation for the week.
Emerging from our conversation was a range of ideas and insights regarding the nature of conversation–the concept, key characteristics, techniques, and so on. A few samples include:

Who should be involved? And who is served? both have the same answer.

Three key outcomes from our work are:

Our next step is to pilot test the Fuschl Extension, perhaps in association with Global Open Space 2007 (previously known as the Asilomar Conversation of the International Systems Institute).
Topic 5: Unity as a Part of Diversity
a new resource from the 2006 Fuschl conference
Team members: Gabriele Bammer, Maria Mercedes Clusellas Cornejo, Debora Hammond, Wolfgang Hofkirchner, Matjaz Mulej and Gary Metcalf.
Do you want to know who is working on unifying concepts for systems thinking?
Do you want to know what resources are available for developing unifying concepts?
Then go to: http://www.anu.edu.au/iisn/index.php?action=systems
One of the working groups at the 2006 Fuschl conference focused on core concepts underpinning systems thinking. It addressed the following questions:

The working group led discussions with all the Fuschl conference participants to identify people working on unifying or core concepts, as well as resources useful for such a task. These people and resources are now listed on a webpage at http://www.anu.edu.au/iisn/index.php?action=systems 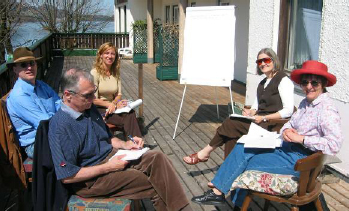 We are looking to make the list as comprehensive as possible and to keep it updated. The webpage also provides information on how to add new resources or update existing ones.
By Gerhard Chroust