IFSR Newsletter 2008 Vol. 26 No. 1 December
Why conversation and what form do they take?
The Fuschl Conversations were established by the IFSR in 1980, primarily under the guidance of Bela H. Banathy, as an alternative to traditional conferences. A number of systems professionals found that they were disillusioned with a format in which the majority of the time was spent on papers being read or presented to passive listeners, with minimal time for discussion and interaction about the ideas. The Fuschl Conversations took on quite a different nature. As described by Bela, they were to be:

Fuschl am See has been the setting for the Conversations ever since their beginning. It is a beautiful, romantic little Austrian village on a small lake (Lake Fuschl) in lovely Salzkammergut, near Salzburg in Austria. It is surrounded by mountains of approx. 1600m height.
Under Bela’s guidance, the individual teams pursued their own areas of inquiry, but within a general framework that allowed for learning across the teams. Over time, this cross-interaction became more difficult as teams diversified in their topics and approaches.
In 2006, the Fuschl Conversation was devoted to bringing representative members of the IFSR together, in order to consider the role of the Federation in relation to its member organizations. In 2008, the Conversation returned to a more traditional format, but with an overall theme of Systems Research and Education, to which each of the teams were to contribute in their own ways.
The next Fuschl Conversation is planned for 2010. Input about the format and location which will best fit the needs of member organizations will be asked through a questionnaire on the IFSR web site, in preparation for that meeting.
>>> A full set of photos from Fuschl 2008 can be found under ‘Photo Gallery’ on IFSR’s homepage 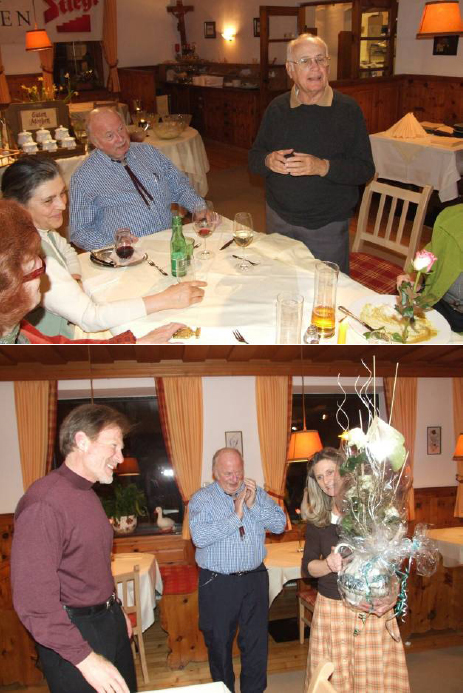 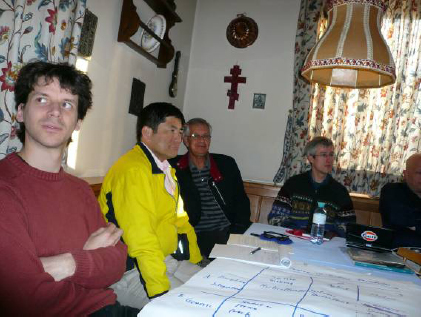 This group had the initial remit of basic concepts in systems sciences, and their use in systems education. The conversation led us through a process of generative strategic dialogue on the themes of the quality of education, the different ways that systems knowledge can be applied in education, the main concepts that might be taught, and the ways in which we might match these concepts with the different types of systems education. 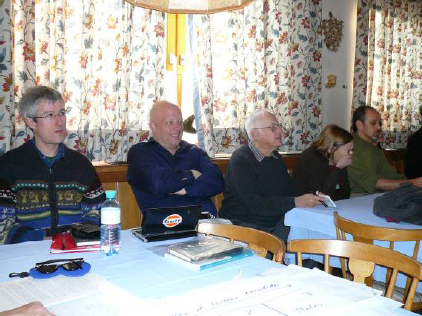 Through this process, we came to realize that differences in systems education are based on two main dimensions: the depth and type of systems knowledge required, and whether systems concepts are taught per se or rather through application within one or more specific disciplines. The table below illustrates the main result of our work, the Systems Education Matrix, which identified six types of recipients of systems education, with examples of each of these types.
The Systems Education Matrix

We described in more detail the capacities which apply to people who would receive education at the levels defined by the three columns and two rows in the matrix. Examples of these capacities include:
1. Sense-making: see things holistically; understand interconnectedness
2.1. Practical mastery: effectively manage messy, ill-defined situations; facilitate integration across disciplines
2.2. Theoretical mastery: deeply understand multiple systems approaches; refine and/or develop new system approaches
A. Discipline-integrated: understand how their field of interest fits into the bigger picture
B. Generic: identify meaningful and potentially useful patterns among multiple disciplines or areas of knowledge.
Although we had initially expected to map systems concepts to the six cells of the matrix, we came to realize that this is a task that must be left for individual educators within the contexts of their own disciplines and the needs of their universities. In particular, each university (and programme of study) specifies different attributes that will be expected of their graduates. We also acknowledged that the concepts contribute to the content of courses, but of equal importance to the quality of the course is the teaching and learning style.
Team 2: The trajectory of systems research and practice
David Ing (CND) (daviding@coevolving.com)
Leonard, Allenna (CND) allenna_leonard@yahoo.com
Metcalf Gary (US) gmetcalf@interconnectionsllc.com
Solomons Leonie (UK) leonie.solomons@gmail.com
Wilby Jennifer (UK) isssoffice@dsl.pipex.com
One of the great dilemmas for systems researchers and practitioners is the sense that we are constantly swimming against a current, so to speak, of ever-greater specialization and diversification. For many years university programs, and even individual courses, specifically about systems theories, have struggled to survive – largely because they did not fit within a defined discipline. Oddly, this has occurred while systems concepts and language have continued to grow in common usage, along with the recognition that many problems faced by people around the world are systemic in nature.
Given these dilemmas, the general question around which Team 2 formed their Conversation was, “in what direction should the future of systems research and practice be heading?” Part of the question had to do with building on the work of the founders and many luminaries connected with systems ideas over the last 50 years. Another aspect was finding relevance to the real-world issues that people face, and with which practitioners are confronted. 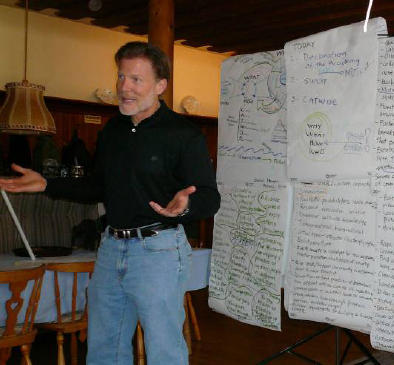 A foundation for the conversation had been established in previous meetings between four of the five participants. In this event, though, it was the work of Team 1 which provided a framework around which the conversation actually took shape.
Team 1 had established a matrix categorizing various types and levels of systems knowledge that might be needed by different people. This was modified by Team 2, as shown below:

In essence, not everyone who needs or uses systems wants or needs to know the history or the philosophical or scientific roots. An example consistent with the above distinctions parallels roles assigned in the design and delivery of engagements, within IBM Global Services. 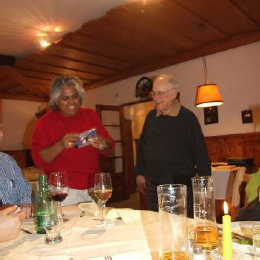 A second example discussed by the team was conflict resolution in Sri Lanka, between the existing government and the Tamil groups. While a great deal of discussion took place over the four days of conversation, the most critical finding was probably the need for the relevance of systems knowledge compared to the setting and the people involved. For novices in the system movement, relevance defines the entry point into which systems practice and system research can enter. Three levels are suggested: 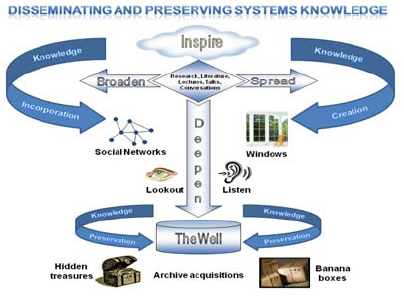 The figure shows the metaphors we used.The most common problem in disseminating and preserving knowledge is the fragmentation of the new and the old knowledge basis, some of them hidden or difficult to access. In most cases there are people dedicated to the preservation, e.g. archiving or creating encyclopedias; and there are people who use these bases to apply it in research, lectures, talks, conversations, applications and who broaden and spread the knowledge base. After a certain period of time, e.g when those who created and those who apply a knowledge base are separated by age/generations, one can witness the separation of two parties. The youngsters think the elders are talking about dead material, the elders think the youngsters are talking about applications they do not understand anymore, and feel being misunderstood or misinterpreted. Prejudices follow. 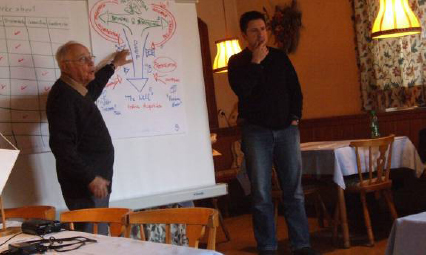 In the chosen metaphor, the well, with the inspirations it has caused? And would it not be fascinating to incorporate the ongoing created knowledge in the well, again? And would it not be worth to gather our efforts to create a system that is in a sense living, co-evolving, recognized as a valuable source of wisdom, for theoretical as well as practical problem solving?
we talked about the power of social networks and the creation of – a metaphor again – windows for people to look into the system of systems science and also most necessary the same windows for systems scientists to look out (mainly digital tools to guarantee open access). Questions still remain and should be further discussed; can we somehow support these gatherings? Can we bridge generations and schools within the already fragmentized field of systems science? Should we preserve this field of knowledge from being forgotten, not only in our societies but also in our universities? Is this purpose reasonable?
We first concentrated on the Well itself, prototypical the “International Encyclopedia of Systems and Cybernetics” (Saur 2004, 2nd Ed.) by Charles François where IFSR’s intention is to preserve this heritage, and make it available for a broader audience and to augment it (as started with the ESCO-project). . We thought of t an online project, perhaps like a Wikipedia. . A discussion followed about the differences between lay and expert knowledge and the quality of the contents produced by “everybody”. 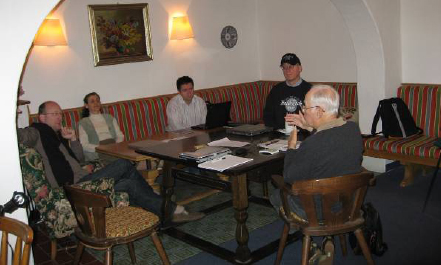 Suggestions for the next step are: 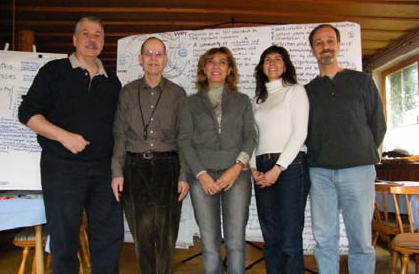 The chosen conversation to was: Applying Idealized Systems Design to advance the International Academy of Systems and Cybernetic Sciences as an Evolutionary Guidance System Our team worked with the recently approved proposal set before the IFSR for the establishment of an International Academy of Systems and Cybernetic Sciences (the IASCS or just the Academy) by Matjaž Mulej and Jifa Gu (for the original proposal, see Proceedings of the 19th European Meeting of Cybernetics and Systems Research, vol. 2, p. 614). 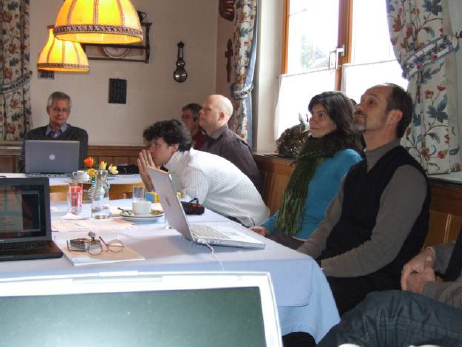 It was our goal to provide a fresh look at how this magnificent, and now officially approved proposal that Matjaž and Jifa had worked so hard on crafting over the past three years, could be brought to life in fulfillment of it’s true potential. We focused our efforts on considering how the Academy could be informed by the notion of an Evolutionary Guidance System (EGS). What would it have to do and to be in order to serve as the EGS for the IFSR — and in consequence, for the systems sciences considered as a dynamic transdisciplinary, transgenerational, and transcultural field? 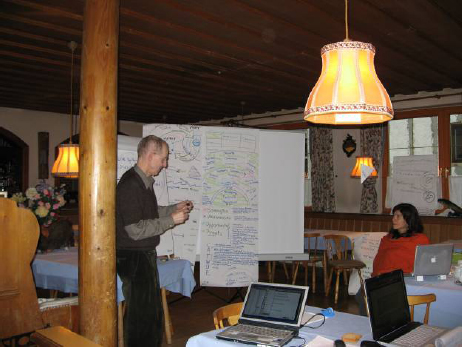 We realized is that if we were to design a way to vitalize the Academy as an open Living Institution, it would have to serve and co-evolve with its stakeholders. Otherwise, it would not operate in a way consistent with it’s mission, vision and values. This simple realization had tremendous implications. We noted that failure to pay attention to it would make both the process and the outcome of our design ineffective and irrelevant.
In this light, the mission, vision and values that emerged from our consideration of the essence and potential of the Academy are as follows:

The mission, vision and values of the Academy must exist in mutual causality. That is
to say, as the conceptual platform of the EGS, they form an integral and interdependent system, themselves. The next steps in the shaping of the future of the IASCS will involve putting these principles into practice.