IFSR Newsletter 2008 Vol. 26 No. 1 December
Yoshiteru Nakamori
School of Knowledge Science, Japan Advanced Institute of Science and Technology,
1-1 Asahidai, Nomi, Ishikawa 923-1292, Japan, nakamori@jaist.ac.jp
W. Ross Ashby (b. 1903, London, d. 1972) was a psychiatrist and one of the founding fathers of cybernetics. He developed the homeostat, the law of requisite variety, the principle of self-organization, and law of regulating models. He wrote Design for a Brain (1952) and an Introduction to Cybernetics (1956).
The commemorative lecture, sponsored by the International Federation for Systems Research (IFSR), is held every second year on the occasion of the EMCSR-Conference in Vienna. 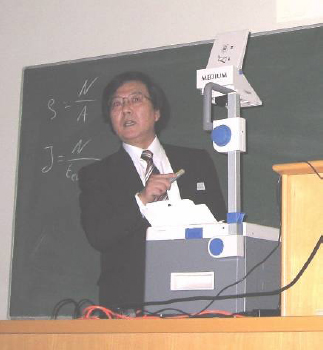 Many approaches to knowledge and technology creation have appeared for these 20 years. Their specific feature is that they try to utilize the irrational or a-rational creative abilities of the human mind, such as tacit knowledge, emotions and instincts, and intuition (Wierzbicki and Nakamori, 2006). In management science a novel approach was developed by Nonaka in 1992, with an international publication: Knowledge Creating Company (Nonaka and Takeuchi 1995). This is the now-renowned SECI Spiral, with its process- and algorithmic-like principle of organizational knowledge creation. This principle is revolutionary because it stresses steps leading to knowledge increase surely, based on the collaboration of a group in knowledge creation and on the rational use of irrational mind capabilities, namely tacit knowledge, which consists of emotions and intuition.
Historically, the first of such approaches is Shinayakana Systems Approach by Sawaragi, with first publications in Sawaragi and Nakamori (1990), in the field of decision and systems science. Being systemic and influenced by the soft and critical systems tradition, it did not specify a process-like, algorithmic recipe for knowledge and technology creation, only a set of principles for systemic problem-solving. To these principles belong: using intuition, keeping an open mind, trying diverse approaches and perspectives, being adaptive and ready to learn from mistakes, and being elastic like a willow but sharp as a sword – in short, Shinayakana.
Further development of the Shinayakana Systems Approach was given in Nakamori (2000), in a systemic and process-like approach to knowledge creation called Knowledge Pentagram System or i-System. The five ontological elements (or subsystems) of this system are Intervention (and the will to solve problems), Intelligence (and existing scientific knowledge), Involvement (and social motivation), Imagination (and other aspects of creativity), and Integration (using systemic knowledge). True to the Shinayakana tradition, there is no algorithmic recipe for how to move between these ontological nodes: all transitions are equally advisable, according to individual needs. Thus, i-System stresses the need to move freely between diverse dimensions of creative space.