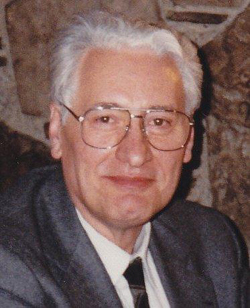 Luigi M. Ricciardi (1942-2011), Luminary, Systems Science, during a European Meeting on Cybernetics and Systems Research in Vienna in the 1990s

Luigi M. Ricciardi was a full professor since 1976 and a member of the Department of Mathematics and Applications of the University of Naples Federico II (Italian only) since 1981, where he was a professor of Probability and Chairman of the Graduate Programme for Research Doctor in Computation and Information Sciences. Previously, he was with the Laboratory for Cybernetics of the Italian National Research Council and, as a faculty member, with the University of Chicago from 1969 to 1976. Successively, he has been a professor at the Universities of Turin and of Salerno. He was the President of the Scientific Advisory Board of IIASS. His research activities, centred on theory of stochastic processes and its applications, especially to biomathematics, has been carried out in collaboration with numerous scientists from different countries. Some of his publications are listed here. He has organized and chaired numerous intenational workshops and is a member of the editorial board of some international mathematical journals.

Obituary
Professor Dr. Luigi M. Ricciardi
Luigi M. Ricciardi, born in 1942, graduated in Physics in 1964 (“Laurea in Fisica”, Naples University) obtained his Degree of “Perfezionamento in Fisica Teorica e Nucleare” (Naples University) in 1967 and in 1971 his “Libera Docenza” in Cybernetics and Information Theory (Italian Ministry of Education). He was full professor from 1976 and a member of the Department of Mathematics and Applications of Federico II Naples University from 1981, where he was professor of Probability. From 1983 he was the Chairman of the Graduate Programme for Research Doctor in Computational and Information Sciences (formerly “Applied Mathematics and Information Technology”). Before being awarded his full professorship in Italy, he had been with the Institute of Cybernetics of the Italian National Research Council (CNR) where he also was Deputy Director for one year, and a faculty member with the Committee on Mathematical Biology and the Department of Theoretical Biology of the University of Chicago from 1969 to 1976. Successively, he has been a professor of Cybernetics and Information Theory at the Universities of Turin and of Salerno.
His research activities, centered on the theory of stochastic processes and its applications to biomathematics, were carried out in collaboration with scientists from different countries, particularly from Japan and US, mainly within the framework of international, bilateral research contracts sponsored by CNR, University, Ministry of Education-University-and-Research (MIUR), all initiated and directed by himself. In particular, he was the National Coordinator of five 2-year “Research Projects of National Interest” with the participation of research groups from the Universities of Salerno and Turin. Recently, he was the Director of an Italian team participating in a 5-year bilateral research project on a strategic topic (nanotechnologies and molecular motors) between Japan Science and Technology Corporation (JST) and Federico II Naples University. He authored, or co-authored, more than 200 publications, mainly appearing in international journals and in refereed international conference proceedings, as well as various books.
He has spent systematic and frequent stays at foreign universities and research centres as visiting professor and lecturer. He stayed most frequently at the universities of Osaka and Kyoto where he taught courses in the Graduate Schools and supervised research activities of doctorate students and post docs as Japanese Ministry of Education special invited professor.
It should be mentioned that the presence of Norbert Wiener in Naples in the very early sixties greatly stimulated Luigi M. Ricciardi to undertake, by rigorous mathematical tools especially of probabilistic nature, research dealing with those problems that Wiener included in the field named by him “Cybernetics”. Among those emerged the problems related to the understanding of information transmission and processing by neural systems. In particular, he was able to establish research groups, currently very active, at the Universities of Torino, Salerno and Naples where the fields of biomathematics and theoretical neurosciences had been totally absent before.
As his colleagues, profs. Nobile, Giorno and Di Crescenzo write: „His studies on Cybernetics and Complex Systems, as well as on Computational Probability, opened new scientific directions; his contributions were the start up for many further researches. He was a leader able to pervade with his enthusiasm new generations making many students growing up into scientists.“
I had the pleasure of meeting Luigi at the (first) European Meeting on Cybernetics and Systems Research in Vienna in 1972 where he organised and chaired a symposium on “Biocybernetics and Theoretical Biology”. It was such a success that I invited Luigi to organise and chair a symposium also at the next Meeting in 1974 and then again at all the following biannual meetings until 2010 when I met him for the last time. The symposia organised by him usually attracted the largest number of contributors with high-quality presentations.
Luigi’s scientific rigor combined with rare enthusiasm convinced me to invite him to act as Associate Editor of „Cybernetics and Systems: An International Journal“, published at that time by Hemisphere Publishing Corp. and currently by Taylor and Francis, both in the USA. In this capacity, he was of great help in soliciting and evaluating papers from leading scientists in the area of biocybernetics.
Owing to his outstanding contributions to cybernetics and systems research the Presidium of the Austrian Society for Cybernetic Studies decided to award him the rare title of Honorary Member of the Society. This title was only one of several with which scientific societies honored him.
But Luigi was not only a scientist, he was a charming, supportive and warm person. I deeply miss him.
Robert Trappl
(reprinted by courtesy of “Cybernetics and Systems: An International Journal”, 2011)