IFSR Newsletter 2010 Vol. 27 No. 1 June
As the previous, historic location of the Conversations (Fuschl near Salzburg) was difficult to reach, also because the meeting rooms were inadequate, a change to a location nearer to Vienna was anticipated. After a long search Gerhard Chroust found a new location:
Kloster Pernegg (www.klosterpernegg.at). Pernegg is located approx. 100 km northwest of Vienna. It can be reached easily by car in 90 minutes and by train in 2,5 hours from Vienna. 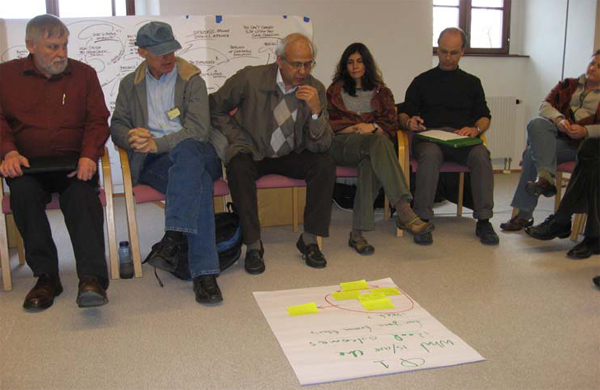 We chose this location because we rightly believed that it was better suited to the purpose of a conversation. The seminar hotel is in the buildings of a former renaissance monastery, but completely modernized and refurbished in the 1990s. It is embedded in a tranquil, almost untouched landscape and looks back at a history of more than 850 years. It provides a focused and inspiring working atmosphere.
The results of the conversation will be published on the Website as proceedings.
Why Conversation and what form do they take?
The Fuschl Conversations were established by the IFSR in 1980, primarily under the guidance of Bela H. Banathy, as an alternative to traditional conferences. A number of systems professionals found that they were disillusioned with a format in which the majority of the time was spent on papers being read or presented to passive listeners, with minimal time for discussion and interaction about the ideas. The Fuschl Conversations took on quite a different nature. As described by Bela, they were to be:

Fuschl am See has been the setting for the Conversations from its beginning until 2008.
Under Bela’s guidance, the individual teams pursued their own areas of inquiry, but within a general framework that allowed for learning across the teams. Over time, this cross-interaction became more difficult as teams diversified in their topics and approaches.
In 2006, the Fuschl Conversation was devoted to bringing representatives of members of the IFSR together, in order to consider the role of the Federation in relation to its member organizations. In 2008 the Conversation returned to a more traditional format with an overall theme of Systems Research and Education.
A full set of photos from Pernegg 2010 can be found under ‘Photo Gallery’ on IFSR’s homepage. 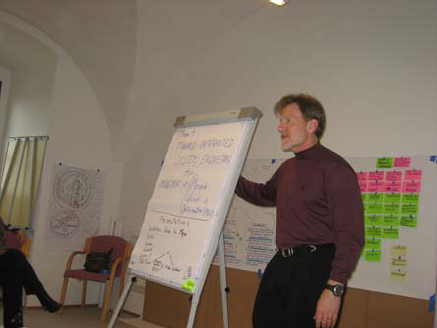 Team 1: Creating Systems Education Curricula
Ockie Bosch, AUS, o.bosch@uq.edu.au
Kambiz Maani, AUS, k.maani@uq.edu.au
Janet McIntyre, AUS, janet.mcintyre@flinders.edu.au
Günther Ossimitz, AT, guenther.ossimitz@uni-klu.ac.at
Magnus Ramage, UK, M.Ramage@open.ac.uk
Vince Vesterby, USA, thegeneralist@themoderngeneralist.com
The goals of the group were to create generic curricula for education and learning about systems for the generalist and specialist tracks, and to explore an active network of systems educators and stakeholders who can benefit from enhanced systems education in having to deal with complex issues.
We discussed the fragmented nature of systems education with multiple traditions expressed in very different ways at different institutions, and developed guidelines for designing two systems courses. The first, ST101 Introduction to Systemic Thinking and Practice, is intended as an introductory course for students from all disciplines. The second, ST301, Advanced Systemic Thinking and Practice, is intended as a more advanced course for students who are faced with complex issues that require a transdisciplinary approach.
Each course design is intended as an aid to educators, and we expect that educators from different disciplines and systems traditions would adapt it to meet the need of different students. The designs contain a set of key systems concepts and frameworks relevant to the appropriate level, along with tools and methods which enable students to explore each concept. The list of tools is partial and indicative, and we fully expect educators to expand the list.
We also worked to develop the requirements and benefits of a global network for systems education and systems educators. Such a network will help to fulfill the needs of managers, policy makers and society in general. It could lead to the ability of more people to practice systems thinking, which will also have a ripple effect on others in society – all of these contributing to systems thinking becoming a more mainstream part of a sustainable society.
We will publish the results of our work in the Pernegg 2010 proceedings and we hope also in a journal article, and feed our ideas into a workshop at the ISSS 2010 conference in Waterloo.
Team 2: The Science of Service Systems
David Ing, CND, daviding@coevolving.com
Norimasa Kobayashi, JP, nkoba@valdes.titech.ac.jp
Allenna Leonard, CND, allenna_leonard@yahoo.com
Gary Metcalf, US, gmetcalf@interconnectionsllc.com
Todd Bowers, US, tdbowers@gmail.com
Janet Singer, US, jsinger@soe.ucsc.edu
Jennifer Wilby, UK, isssoffice@dsl.pipex.com
The work of Team 2 focused on the emerging science of service systems, and how concepts and theories from systems science might aid in its development. The conversation dealt with service systems from the levels of philosophy to applications, including education, modelling and operations. Questions were raised about the distinctions between service systems and other types of systems with respect to characteristics such as relationship, participation, and the new types of complexities they create, as well as how those might affect the co-creation of value (as proposed in the service science literature). Numerous systems models were explored and examined for their relevance to service systems. While a great deal of work is already being done on the development and application of service science, it may be at the level of philosophy, as it relates to decisions at the other levels, where the most work remains.
Team 3: Learning Systems for Sustainability
Alexander Laszlo, MEX, alexander@syntonyquest.org
Kathia C. Laszlo, US, kathia@syntonyquest.org
Stefan Blachfellner , AT, stefan.blachfellner@indaba-consulting.at
Thomas Fundneider, AT, fundneider@emergent-innovation.com
Victoria Haro, MEX, vhs@umamexico.com.mx
Susana Herrera, AR, sherrera@unse.edu.ar
Enrique G. Herrscher, AR, enriqueherrscher@fibertel.com.ar
Hellmut Löckenhoff, DE, loeckenhoff.hellk@t-online.de
Johannes Pfister, DE, johannes.pfister@interquality.de
Regina Rowland, US, regina@reginarowland.com
The specific conversation topic for Team 3 within this year’s theme of Learning Systems was: ‘Designing a meta-system as a vehicle for enabling dialogue and collaboration among diverse and geographically dispersed individuals and institutions with a shared identity around innovating learning systems for sustainability.’ 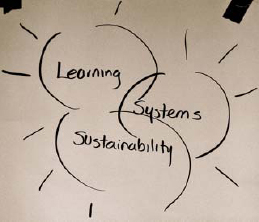 Our team worked on design issues at the intersection of learning, systems, and sustainability. We explored the urgent implications of sustainability as a framework for addressing the complexity and interconnectedness of global and regional challenges such a climate change, water shortage, energy supply, resources availability, and so on. At the core of such sustainability challenges are questions related to the way human and human activity systems live, learn and interact with their environment. 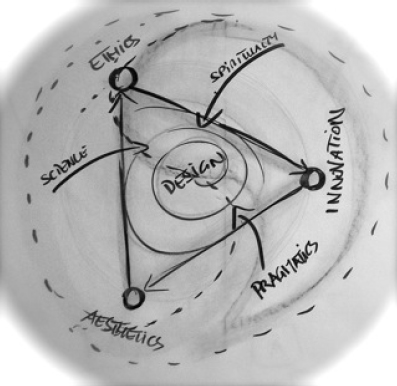 The scaffolding we created for a meta-system of pro-active co-adaptation (i.e., sustainability) of people with planet considered the dynamic interplay of ethics, aesthetics, and innovation in a learning and design context informed by science, spirituality, and pragmatics. Design was understood to be a product of self-organizing action inquiry (i.e., learning), and as such, is entirely emergent and ever evolving. By basing our design approach on systemic action inquiry we underscored the fact it is not possible – or desirable – to know what the result of the design will be at the beginning of the process. Freedom of the definition of outcome is essential. 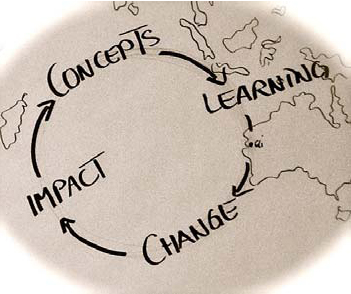 This insight made clear that whatever we were to name our meta-system model, it would have to be about process, pattern and relationship rather than about product, outcome or object. We spent much time considering appropriate metaphors, but in the end chose to hold the naming playfully, to focus on the content of the model, and to let the name for it emerge.
The three main components of our meta-system for pro-active co-adaptation through self-organizing action inquiry are:

The operational cohesion of the link-tank serves to integrate the approaches developed in the individual projects of the do-tank in an emerging pattern language of sustainability captured in the think-tank. This pattern language is then fed back to the do-tank to inform and align them with each other as well as with the ever changing needs of global sustainability.
Team 4: Systems Science and Systems Engineering
Yoshi Horiuchi, JP, horiuchi@sic.shibaura-it.ac.jp
Gerhard Chroust, AT, Gerhard.Chroust@jku.at
Gordon Dyer, UK, gordon.dyer@btinternet.com
Sadaharu Ishida, JP, sishida@microsoft.com
Leonie Solomon, AUS, leonie.solomons@gmail.com
The team explored a hypothetical urban transportation problem as a basis for developing a more “systems rich” form of systems engineering approach. We believe that our consideration of urban transportation represents a more systemic approach to a complex case study. Rather than considering the problem of transporting people and goods, we consider the movement of people, goods and information as one system. Traditionally, we use information as means to improve the transport of people and goods, thus limiting the scope of the system boundary. ICT is also recognized as a lever of change and as a typical source of counterintuitive effects. When used effectively it has the potential to reduce traffic loads and or journey times, a feature we would hope to exploit; but it also has the potential to increase traffic flows for leisure purposes. People learn of more opportunities for leisure e.g. an art exhibition, through faster and more pervasive ICT and this stimulates their response to travel to it.
Most emphasis is given to a design methodology which brings “requisite variety” through user-designers being involved in all aspects of the design of an improved urban transport system. The wider boundary considerations provide the potential to reduce undesirable repercussions caused by introducing change. The paper identifies the additional considerations that would be reflected in the main phases of a typical systems engineering design process. We call this enhanced process “Integrative Systems Engineering”.