Joint Berliner November of the (Deutsche) Gesellschaft für Kybernetik (GfK) and Gesellschaft für Pädagogik und Information (GPI), Berlin October 29, 2010.
Joint Berliner November of the (Deutsche) Gesellschaft für Kybernetik (GfK) and Gesellschaft für Pädagogik und Information (GPI), Berlin October 29, 2010 Recently in the Berlin Clubhaus der Freien Universität Berlin took place the Berliner November. On these traditional annual meeting discussed around 25 Scientists some lectures. Unfortunately not all of the indicated speaker could participate. Peter Parycek started his talk with an overview on media history since invention of printing to Cyberspace. He argued that new media in particular social networks led to a differentiated consideration of democracy and policy. In particular public become the fifth force in separation of powers. Eberhard von Goldammer dealt with Gotthard Günther’s Cybernetics and Philosophy which – he argued – would be in some parts closer to Asian thinking than to European tradition. Siegfried Piotrowski presented a lecture on the Development of Educational Cybernetics since the 1960ies. Ih the talk he appreciated well known scientist of this field, like Helmar Frank, Felix von Cube, Miloš Lánský, Heinz Lohse, Klaus Karl Manfred Krause and others.
The lecture block was followed by an exceptional appreciation of Helmar Frank, a pioneer of Educational Cybernetics in Germany and cofounder of GPI (Gesellschaft für Pädagogik und Information). In Honor of his extensive contribution to the development of Cybernetics the GPI had been nominated Frank to honorary president of the Society. Because for health reasons Frank could not be in Berlin, his long-standing employee and colleague Günter Lobin received the price and will it deliver to Helmar Frank.
The Symposium finished with the ceremony of the Wiener Schmidt Award. The jury decided to put this important price tag on Gerhard E. Ortner for his life’s academic work. Grown up in Vienna he studied economic sciences, law and pedagogy at the Austrian Capital and received a postdoctoral qualification at the University of Paderborn. Ortner worked at numerous universities and was long-time managing director of the Centre for Distance Education Research at the FernUniversität in Hagen, Germany. He had done many contributions to the field of economics of education and educational media. The Jury of the (Deutsche) Gesellschaft für Kybernetik is proud of being able to continue the line of the Wiener Schmidt Award winners – Milos Lánský, Klaus Weltner, Uwe Lehnert, Friedhart Klix, Klaus Krippendorf, Felix von Cube – with Gerhard E. Ortner. 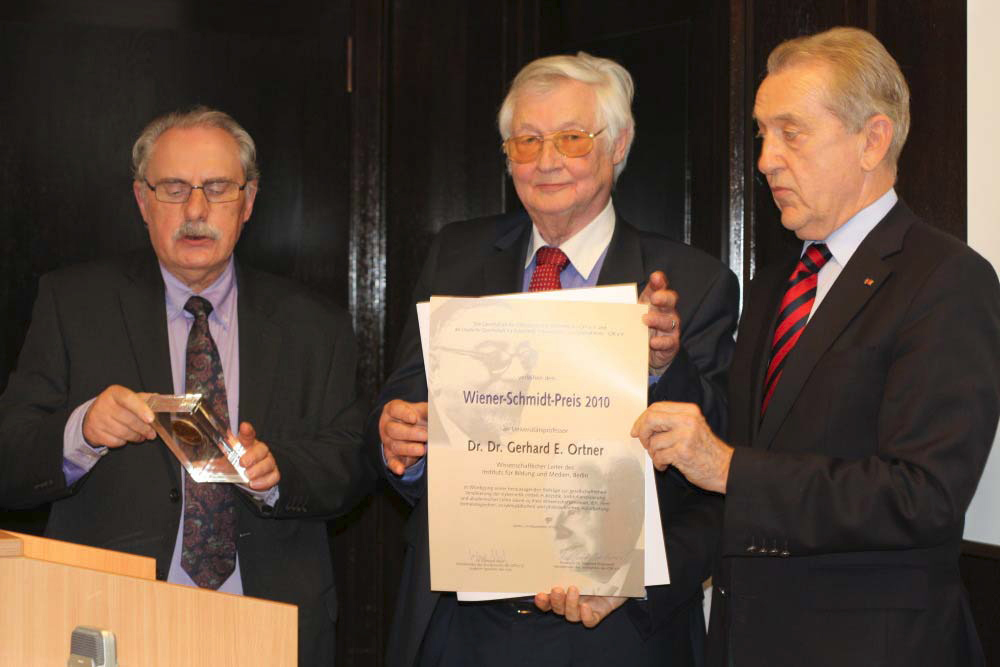