Proceedings of the IFSR Conversation 2012, St. Magdalena, Linz, Austria
Obstacles to a Unified Systems Praxis Ontology
Richard Martin
IFSR 2012 Team 4 topic: “Participants will seek to clarify the attributes of a language that most interested parties could adopt and employ and that proves necessary and sufficient for collaboration, co-learning and co-evolving in the system praxis field.”
In 2003, ISO TC184/SC5/WG1 began an effort to consolidate the formally defined terms from the International Standards adopted by TC184/SC5 related to automation systems interoperability and related works of other IEC and ISO groups. The purpose of this effort was to allow those involved in the drafting, adoption, and revision of International Standards an opportunity to examine existing term definitions before they created new definitions. That effort culminated in a glossary published by ISO TC184/SC5 as N994 in 2010 that contains 327 different terms from 29 documents including 15 TC184/SC5 International Standards.[1] Definitions are annotated with the usage context and reference, and preferred definitions are identified for reuse where possible. All of these standards are related to various system engineering aspects of industrial automation systems.
The authors of the TC184/SC5 work conducted a stakeholder survey and analysis of term use in an attempt to better understand the difficulty authors and editors have with technology term reuse. Two additional publications resulted. The first was the ISO/TC 184/SC 5 N895 Vocabulary Study Group Final Report (2006) and the second was an IKSO 2006 Conference paper titled The Integration of Standards for Knowledge Organization in the Domain of Manufacturing Enterprises.[4] Both of these describe analysis and survey efforts associated with the preparation of the final glossary.
In about the same time frame, the IEEE Computer Society in conjunction with ISO/IEC JTC1 conducted a similar activity for the work products related to Information Technology identifying a Software and Systems Engineering Vocabulary that now is included in the IEEE Standards Dictionary of 29,000 terms.[2] Some of these IEEE related standards are also included in the TC184/SC5 N994 document. A distinguishing feature of this effort is the automated search interface that is provided online, now a common feature for dictionaries.
Another effort by ISO for its entire catalog of defined terms from 18,000 International Standards was launched in 2009 as the ISO Concept Database.[3] This online database of defined terms is similar in function to the IEEE work product in that keyword-based inquiry yields term definitions but in this case it is all definitions containing the keyword.
Two aspects of these three efforts are revealing: 1) none appear to be used by authors or editors of new works to actually reuse definitions across domains with few providing reuse even within domains; and, 2) most terms have several, sometimes conflicting, definitions. Given these observations, why might we expect that an effort to understand “the attributes of language that most interested parties could adopt and employ and that proves necessary and sufficient for collaboration, co-learning and coevolving in the system praxis field” may yield substantive results?
We can observe that the three efforts above are addressing specific term use in a particular context. A technical term is to be defined whenever the use in a particular context, like an International Standard specification, deviates from the ‘common meaning’ of the term. The fact that most terms have several ‘common meanings’ tends to exacerbate the proliferation of specialized definitions. Even when pruning the potential meanings to the one chosen for use in the document, the tendency is to further embellish the term’s definition and thereby specialize the specialization.
In addition, while the standard does specify a particular meaning for a term or phrase in the work, readers often re-interpret that same word or phrase when encountered in the text because there is no means for distinguishing the particular meaning when it appears – defined terms are not tagged in the text. After reviewing a technical specification for several hours and 70 pages or so deep into the specification, it is almost impossible to retain the special meaning intended for a particular word or phrase defined at the beginning of the document, especially if your practice ascribes a different meaning. We also note that writing style and translation idioms creep into the mix both for non-English speaking authors/editors and eventual users of the English or French text (most International Standards are published only in English unless they also are adopted as National Standards by a member Body of ISO or IEC).
The use of terminology in engineering disciplines is influenced by training, practice, and regional factors. The same can be said of terminology used in scientific disciplines. We are not going to ‘standardize’ term use precisely because of the need to communicate contextualized knowledge among people with very diverse backgrounds. Distinguishing terms in context is essential to knowledge transfer. However, we should be able to focus on those ‘attributes of language’ that do enable more productive communication and yet provide for suitable contextualization of use for specific terms and phrase.
Toward that end, we have examined several efforts to formalize expressions of ontology associated with both an “upper level” for use across all domains and domain specific works. An example of the later is the ISO 18629 series for a Process Specification Language (PSL). The underlying language used for PSL is KIF (Knowledge Interchange Format).

PSL servers as a precise interface specification language, which machines can process for the exchange of process relevant information between those machines. PSL is a meta-language for the processes that are communicated across the interface. The ontological aspect of its specification helps to assure that the language is complete with respect to the domain that it serves.
At the other end of the spectrum for formalized ontology are several works, beginning with the early Greeks and continuing today. Upper-level ontology, i.e. those intended to serve all or at least most domains of discourse, have seen extensive efforts over the past 40 years. Of particular interest in the manufacturing domain is the work centered on the DOLCE effort at the Laboratory For Applied Ontology in Trento, Italy.

“Developing foundational ontologies is not simple at all. We decided to describe first a core set of key ontological assumptions, focusing on the needs of other projects we were involved in, and reflecting our own choices and intuitions… This was the origin of DOLCE, whose acronym (Descriptive Ontology for Linguistic and Cognitive Engineering) reflects what we have called a cognitive bias. Since its first development, DOLCE was not intended as a candidate for a “universal” standard ontology, but rather as a reference module, to be adopted as a starting point for comparing and elucidating the relationships with other future modules of the library. Indeed, the public availability of DOLCE – since its first release – stimulated other research groups working on formal ontology to make their own ontologies available in the library as independent modules, although linked to DOLCE according to the WONDERWEB philosophy.”

The attractiveness of this work is that it has focused on two domains of interest to system engineers. The initial DOLCE effort was sponsored by the WonderWeb research project funded by the IST Programme of the Commission of the European Communities with a focus on web services technologies.[5] The final project deliverable has an expression of DOLCE in KIF as well. An extension of the DOLCE effort focused on a series of workshops titled Formal Ontologies Meet Industry. These workshops examined the application of ontologies to a wide variety of industrial applications with an understanding that it is the domain specific use of an upper-level ontology that yields the value of that ontology. Like PSL, DOLCE identifies relationships among concepts with formal semantics suitable for application within domains, including inference.
One other ISO effort is worth mentioning as an ‘upper-level’ formal ontology. The ISO 15926 Industrial automation systems and integration — Integration of life-cycle data for process plants including oil and gas production facilities series of International Standards specifies with formalization in the Express Language, standardized in ISO 10303-11, the ontology for use among a large industrial domain with a wide variety of sub-domains.

“ISO 15926 is an International Standard for the representation of process plant life-cycle information. This representation is specified by a generic, conceptual data model that is suitable as the basis for implementation in a shared database or data warehouse. The data model is designed to be used in conjunction with reference data, i.e. standard instances that represent information common to a number of users, process plants, or both. The support for a specific life-cycle activity depends on the use of appropriate reference data in conjunction with the data model.”

While the work is characterized as a ‘data model’ it is in fact an ‘upper-level’ ontology for use in defining application level data models for use within the industrial domain. Of particular note is the ontic commitment to what is often called a 4D approach that explicitly considers all physical things in both space and time. This approach is consistent with the DOLCE foundational ontology as described below:

“In general a 3D option claims that objects are: a) extended in a three-dimensional space; b) wholly present at each instant of their life; c) changing entities, in the sense that at different times they can instantiate different properties (indeed, one could say When I was
out in the balcony my hands were colder than now). On the contrary a four dimensional perspective states that objects are: a) space-time worms; b) only partially present at each instant; c) changing entities, in the sense that at different phases they can have different properties (My hands during the time spent out in the balcony, were colder than now).”

Finally I want to examine one last ontological effort that is helpful in making my closing cautionary comments. WordNet is a project maintained by Princeton University that is a lexical database of English with nouns, verbs, adjectives and adverbs grouped into sets of cognitive synonyms, which results in a network of meaningfully related words and concepts.[6] Below is one of those networks emphasizing the words ‘system’, ‘environment’, and ‘context’. These words were chosen to relate because of their importance to system engineering and system science. 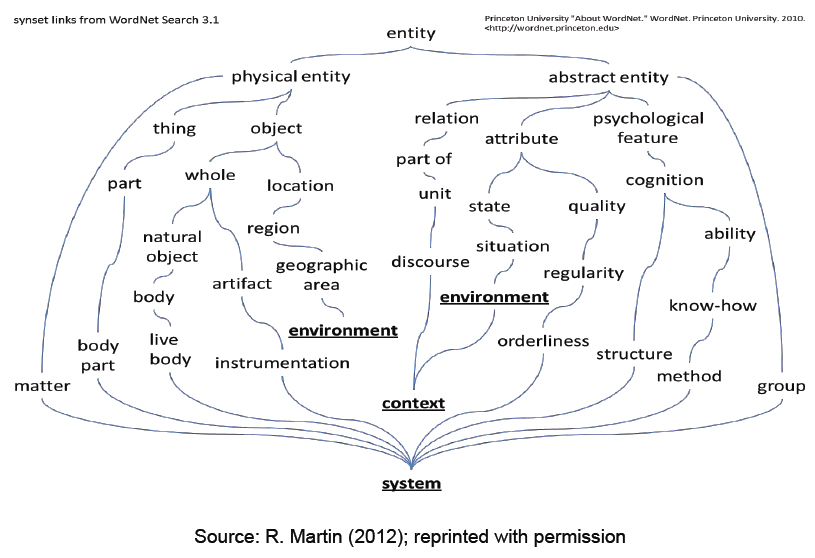