After the Conversations in 2008 and 2010 where we looked at the status of Systems Sciences and their inner relationships this year we choose to look into the future. We recognized that there are different path into the future and that System Sciences as a discipline have to make some choice.
The Fuschl Conversations were established by the IFSR in 1980, primarily under the guidance of Bela H. Banathy, as an alternative to traditional conferences. A number of systems professionals found that they were disillusioned with a format in which the majority of the time was spent on papers being read or presented to passive listeners, with minimal time for discussion and interaction about the ideas. As described by Bela, they were to be:

In 2012 the overarching theme for the conversation was how to reposition systems thinking in a changing world both with respect to scientific research and practical applications, in view of historical roots and the precarious situation of our environment. Hence the title “Systems and Science at Crossroads”.
The deliberations of the 4 teams supported the over-all theme in different ways:
Team 1: Revisiting the socio-ecological, social-technical and socio-psychological perspectives
Team 2: Science II: Science Too!
Team 3: Designing Learning Systems for Global Sustainability
Team 4: Towards a common language for systems praxis. 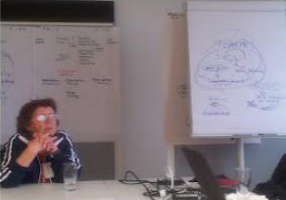 The thought at the time that the team was being formed was that the legacy of Tavistock and the material that came out of it were quite well known, but that the ideas had fallen out of use and possibly even currency. Through the contributions of Merrelyn Emery to the team, it became apparent very quickly that there were many gaps in information (at least by the other four team members), and varying interpretations of both the history and the theories. That turned the focus for the first part of the week into clarifying and correcting what was known and understood.
Much of the history of Tavistock, and many articles by its members, can be found in the online version of the Tavistock Anthology: http://www.moderntimesworkplace.com/archives/archives.html. Seeing articles written to capture ideas formally, in retrospect, though, gives little indication about how the ideas came to be, or of the relationships between the people involved. There was, for instance, a great deal of international exchange and collaboration which helped to develop the concepts associated with socio-technical systems, which happened in and around professional meetings and conferences. This included people such as Russ Ackoff, West Churchman, and Ross Ashby, in addition to Eric Trist, Fred Emery, and others who are typically associated with the work.
In learning more of the history it became clear that much of what was common knowledge for the people involved has been lost along the way since then. Kurt Lewin, for instance, is often associated with the concepts. His main contributions to this work, though, were through his research in the 1930s into principles of democracy, which helped to form the theoretical basis for the design principles of autocracy and self-managing, democratic groups. And while Bertalanffy is the name associated with open systems for most people today, as Merrelyn explained, “everyone had read Andras Angyal, and almost no one [in those groups] spoke of Bertalanffy.” 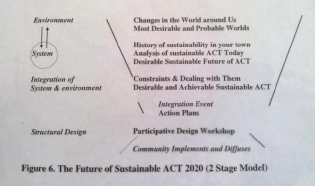 More of the week was spent digging into the basic constructs, understanding, for instance, exactly what was meant by Design Principle 1 (DP1) and Design Principle 2 (DP2), and what distinguished them from each other. There were also questions about how the Design Principles related to the different environments which had been described (Types 1 through 4).
It became clearer through discussion that the term “environment” had a number of different meanings in different contexts. The immediate work environment for an organization, for instance, is usually the “task environment.” The primary concept of environment, which comes from the work done by Emery & Trist (1965) is the “global social environment” – those elements which affect the relationships and functioning of the system in question most relevantly. It is explored in the Search conference.

As the week progressed the team moved from a focus on history and theory (though those continued to be revisited) to questions about where and how the principles showed up today, in different kinds of organizations and circumstances. Indeed, many of the early examples where self-managing work groups had been instituted no longer existed. After it was understood that the DP2 structure needed to be incorporated into the legal structure of the organization, the new structure remained intact and functioning.
This led to questions about transitions of structures within and between organizations. [It seemed probable that] Some work groups (e.g. some kinds of start-ups) began as self-managing organizations and became more hierarchical as they grew and evolved. Sometimes large corporations or projects experimented with such structures in their efforts towards innovation. (A specific example discussed was the building of Terminal 5 at Heathrow Airport, which seemed to function as a DP2 structure throughout the construction phase, but then dissolved entirely when it was handed over to operations, which was a DP1 structure.)
By the end of the week there were, as always, more new questions and possibilities than final conclusions and answers. It provided, however, a strong foundation on which more research into self-managing workgroups and organizations can be based. 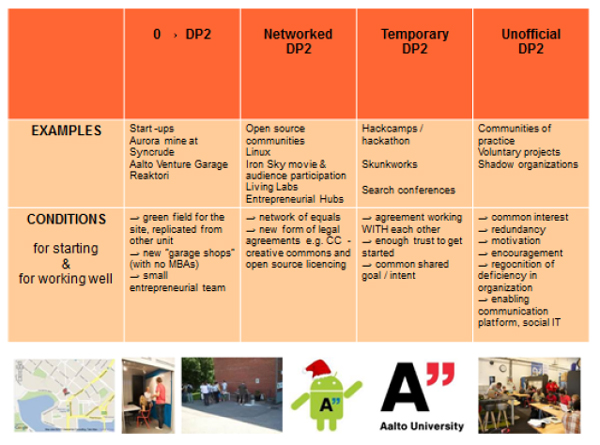 Team 2: Science II: Science Too!
Stuart Umpleby , USA (umpleby@gmail.com )
Jerry Chandler , USA ( Jerry_LR_Chandler@me.com )
Allenna Leonard (CND) allenna_leonard@yahoo.com
Michael Lissack , USA ( lissack@buy-in-naples.com )
Hellmut Loeckenhoff , D (loeckenhoff.hellk@t-online.de )
Tatyana Medvedeva , RU ( tmedvedeva@mail.ru )
Leonie Solomon , AUS ( leonie.solomons@gmail.com )
We began by raising issues such as: social science practitioners express frustrations and/or limitations with Science 1, general needs of a philosophy/epistemology of science, specific needs for a hypothetical science II, and what would that science ii include? We then defined frustrations and limitations regarding Science I (as expressed by individual members of the team): methodological misfits, reliable prediction is not always possible. our ability to “see” and “express” certain phenomena is restricted by science in use, the experience of “x” is not the same as the label “x”, and ceteris paribus is nonsense.
Our discussion then turned to the philosophy of science as used. We discussed that articulations of examples are most commonly physics based, despite the claims by physicists, other sciences cannot be reduced to physics or its equivalents without raising issues of both epistemology and ontology, other sciences have unique requirements demanding exact articulations, and that systems composed of thinking elements should not be described using methods developed for systems with non-thinking elements. This led to the idea that deficiencies in the philosophy of physics generate frustrations with the role of observers, the role of emergence, the role of habitus (i.e. the social, cultural, cognitive, historical, contextual milieu) and ambiguity of number symbols (whole versus continuous). We then observed that we saw no place for reflexivity and that “physics envy” was not appropriate for many other fields (e.g. chemistry, biology, social sciences…..). 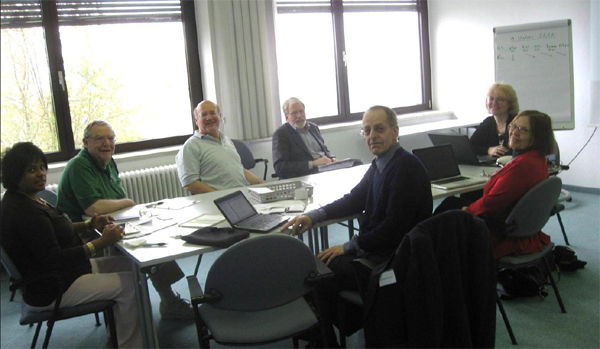 This allowed us to discuss some more general needs:

Which, in, turn led to some preliminary conclusions:

We concluded that Science II needs to enrich the systems approach and reconcile the Eastern and Western approaches. Science II demands narratives (as shown by example of medical heuristics, e.g. narratives told by physicians to patients). Science II includes reflexive anticipation, and it demands more variety in describing homeostats and balance relationships and in ways to express circular causality. For managers, Science II demands that the very notion of “best practices” needs to be re-examined.
Our full report is on-line at http://isce.edu/ifsr.pdf 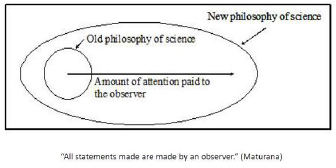 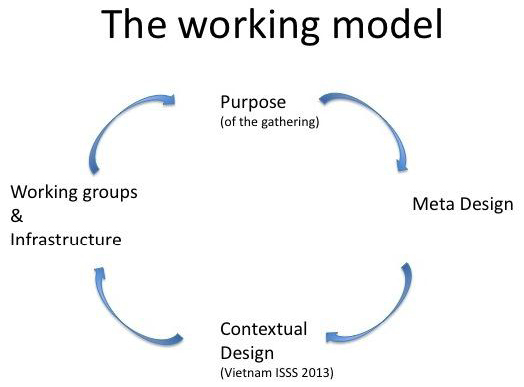 Our team worked on the practical design challenge of creating a series of related international events that address issues of liveability and thrivability in terms of systemic socio-ecological innovation. To do this, we focused at two systemic levels of intervention: at one level (which became the meta-level), we focused on curating the conditions for a thrivable planet. This was the larger vision – the idealized design objective that allowed us to contemplate a variety of pathways to address this objective. In this sense, it served as a design attractor for our work. We then chose to focus upon one feasible and realizable pathway that could serve as a functional prototype for addressing the meta-level objective. The 57th Meeting and Conference of the ISSS, set for Viet Nam in July of 2013, was selected to serve as the systemic case for our specific contextual design initiative. This became our system in focus, and our design efforts were then concentrated on setting an actionable agenda for the realization of this event. 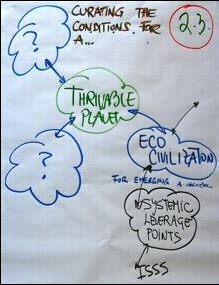 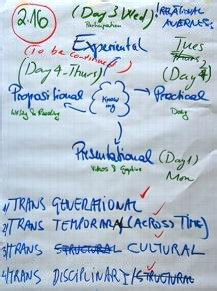 Given that there are numerous pathways to address the meta-level design objective, we set the system level objective for the ISSS Conference based on the theme of Systemic Leverage Points for Emerging a Global Eco-Civilization. By setting this focus we intended for ISSS 2013 to provide both a platform for other contextual designs framed within the meta-level objective of curating the conditions for a thrivable planet, as well as to catalyze the emergence of a network of such initiatives through the specific system level focus chosen for this event. We considered that the selected conference theme would attract living cases of systemic sustainability – those which demonstrate socio-ecological innovations that span social, technological, economic, agricultural, and infrastructural domains. By focusing ISSS 2013 on the exploration of both real-world cases of systemic sustainability and theoretical models dedicated to their promotion, this event will serve to seed the emergence of a Global Living Laboratory network of such initiatives. The result of this event would therefore be the emergence of an auto-catalytic socio-technical system focused on individual projects of systemic sustainability that collectively contribute to the creation of conditions for a thrivable planet.

We took on the challenge of unifying the languages of “systems praxis” to help practitioners deal with the major cross-discipline, cross-domain problems facing human society in the 21st Century. The week provided a remarkable opportunity for systems engineers, systems thinkers, and systems scientists to work together to make progress on really difficult issues. Representatives of INCOSE, a new IFSR member organization, participated in the Conversation for the first time.
Given our goal of a “common language for systems praxis”, we explored both the challenges of developing common languages and alternative definitions of systems praxis, including

We used Checkland’s CATWOE2 approach to understand the usage, context and constraints
2 P. Checkland. Achieving ’desirable and feasible’ change: An application of soft systems methodology. The Journal of the Operational Research Society, 36(9):pp. 821– 22 for any “common language for systems praxis” (excerpts):

Our ongoing conversation is contributing content for the INCOSE Guide to Systems Engineering Body of Knowledge currently under development. Feedback from interested members of the IFSR community is welcome. 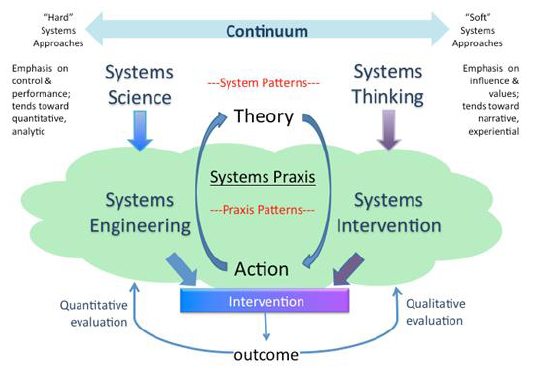