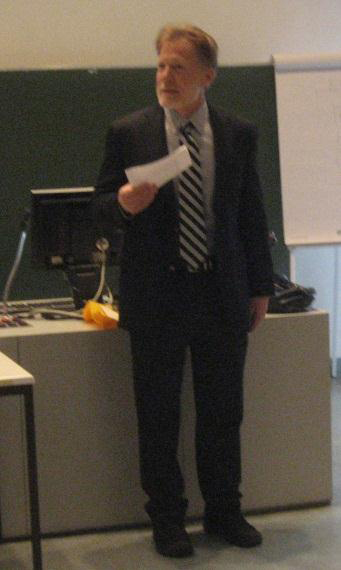 The year 2012 will hopefully mark a positive milestone in the history of the IFSR. Since its founding in 1980, the governance of the Federation has operated in essentially the same way. Every two years, the board (representatives of each member organization)
has gathered in Vienna to conduct the business of the organization. That was not so difficult for the original three members. It continued to make sense even as the Federation grew, primarily with new members in Europe and North America – and with the technologies of the times. Now, with nearly 40 active member organizations spread across five continents, and the availability of easy and affordable means of communication, we need to change.
An amendment to the Constitution was passed at the 2012 board meeting, directing the development of electronic means of discussion and decision-making by the board. (The specific technologies to be used were left intentionally vague so as not to become outdated as new alternatives arise. At present, we expect to begin with one or more Internet, web-based tools.) Importance will be placed on both ease of use and equal access – to the extent possible – by all members. This will hopefully mean full participation in decisionmaking by members, rather than only those who can afford the time and costs to travel to Vienna. It will also allow for more expedient decision-making rather than waiting for two years before new issues could be addressed.
Another change was a new location for the IFSR Conversation (historically the Fuschl Conversations). Two years ago we moved them for the first time to a renovated monastery in Pernegg, Austria. While that location was more conducive to meeting than the small hotels in Fuschl had become, it was less than ideal. This year the Conversation was held at St. Magdalena, a small conference center in Linz, Austria. Based on the reactions and productivity of the four teams, it would appear that this is the kind of environment we need to seek. Again, though, there are questions about the timing and location for these events. Should they be only every two years, and always in Austria?
In order to support the challenges facing the Executive Committee, in moving the new initiatives forward, two new vice presidents were elected: Stefan Blachfellner and Yoshihide (Yoshi) Horiuchi. The third vice president role was designated for the Systems Research and Behavioral Science journal (without committing Mike Jackson or Amanda Gregory, or another person individually.)
Stefan has been asked specifically to help with new technology, including the electronic board system and updating the IFSR website. Yoshi (who has attended all but two Conversations since their beginning) will focus on development of the Conversation events, with the intent of expanding access and inclusion for participants. The SRBS VP chair is intended to be supported by a Working Group, to better align our members and their journals with each other, and with SRBS. (Ideally, articles written by systems scientists should find their way to the best journals for their topics, and cross-referencing by authors would improve the quality and the ranking of all our member’s journals.) If you are interested in serving on this Working Group, please contact me directly.
The International Academy of Systems and Cybernetic Sciences (IASCYS) also saw a change in leadership. We are quite fortunate that Robert Trappl (one of the founders of the IFSR) agreed to take the role as President, allowing Matjaz Mulej to devote needed time to his family. Matjaz and I began as vice presidents for the IFSR together in 2002. It would be hard to guess the number of hours he has contributed over the years to the work of the IFSR, and in co-founding the IASCYS with Gu Jifa, and to work in systems science in general. Our thanks, and our very best wishes to you, Matjaz.
I would personally like to thank Kyoichi (Jim) Kijima, Leonie Solomons, and Amanda Gregory for their time, efforts, and support as IFSR Vice Presidents over the last two years. This frequently included poor-quality Skype calls across 14 different time zones, along with the planning and projects involved in these roles. I would also like to thank Stuart Umpleby for his work, along with Leonie, in facilitating our discussion in Vienna about future strategy for the Federation. My special gratitude goes to Gerhard Chroust, who will continue on as Secretary General for the Federation – and without whom it would simply cease to function.
Gary Metcalf, Ph.D.
President, IFSR
gmetcalf@interconnectionsllc.com
By Gerhard Chroust