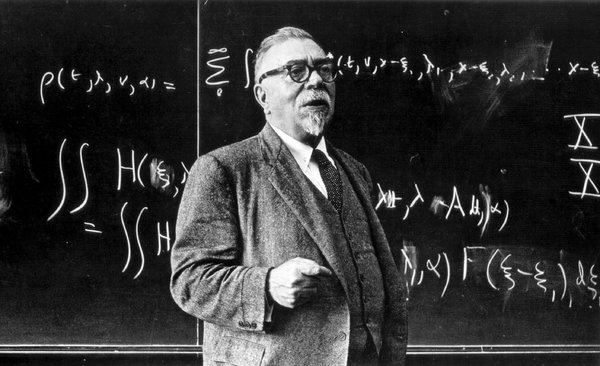 Norbert Wiener (1894-1964), an American mathematician, at the blackboard. MIT Archives

Almost 50 years after his death, portions of the essay “The Machine Age” by American mathematician Norbert Wiener (1894-1964) were recently published in the New York Times, righting a 50 year error by the world renown newspaper. Excerpts of the essay are courtesy of the M.I.T. Libraries.

One of those visionaries was Norbert Wiener (1894-1964), an American mathematician at the Massachusetts Institute of Technology. In 1948 he had published “Cybernetics,” a landmark theoretical work that both foreshadowed and influenced the arrival of computing, robotics and automation. Two years later, he wrote “The Human Use of Human Beings,” a popularization of those ideas and an exploration of the potential of automation and the risks of dehumanization by machines.

There is general agreement among the sages of the peoples of the past ages, that if we are granted power commensurate with our will, we are more likely to use it wrongly than to use it rightly, more likely to use it stupidly than to use it intelligently. [W. W. Jacobs’s] terrible story of the “Monkey’s Paw” is a modern example of this — the father wishes for money and gets it as a compensation for the death of his son in a factory accident, then wishes for the return of his son. The son comes back as a ghost, and the father wishes him gone. This is the outcome of his three wishes.
Moreover, if we move in the direction of making machines which learn and whose behavior is modified by experience, we must face the fact that every degree of independence we give the machine is a degree of possible defiance of our wishes. The genie in the bottle will not willingly go back in the bottle, nor have we any reason to expect them to be well disposed to us.
In short, it is only a humanity which is capable of awe, which will also be capable of controlling the new potentials which we are opening for ourselves. We can be humble and live a good life with the aid of the machines, or we can be arrogant and die. 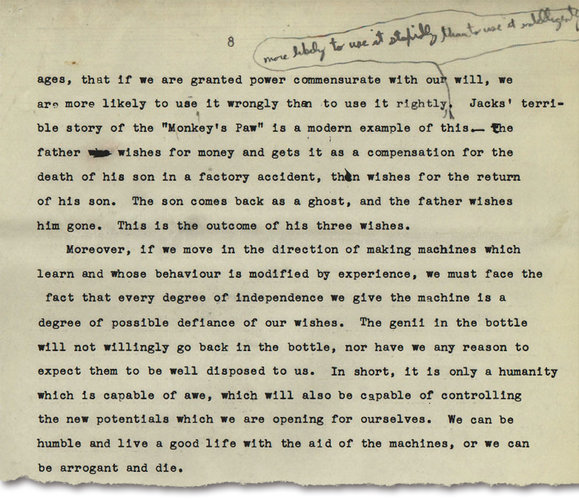 Guide to the Papers of Norbert Wiener MC.0022: Massachusetts Institute of Technology. Institute Archives and Special Collections
By Gerhard Chroust